The Narcotics Control Bureau (NCB) on Wednesday filed a criminal case against Rhea Chakraborty and others for their alleged dealings in banned drugs, officials said. 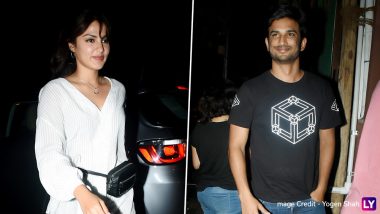 New Delhi, Aug 26 (PTI): The Narcotics Control Bureau (NCB) on Wednesday filed a criminal case against Rhea Chakraborty and others for their alleged dealings in banned drugs, officials said. They said various sections of the Narcotic Drugs and Psychotropic Substances Act (NDPS) have been pressed in the complaint filed by the federal anti-drug agency on an official reference received from the Enforcement Directorate (ED). Sushant Singh Rajput Death: ED Writes to Narcotics Control Bureau Seeking Guidance on Drug Angle in the Case.

The alleged narcotics dealing links are connected to the criminal probe being conducted in the death of actor Sushant Singh Rajput, 34, who was found hanging at his duplex flat in Mumbai's Bandra area on June 14. The NCB is now the third federal investigative agency probing this case apart from the ED and the CBI. Rhea Chakraborty Never Consumed Drugs in Her Life, Ready for Any Test, Says Actress Lawyer in Sushant Singh Rajput Case.

The ED, which is probing a money-laundering angle into the death of Rajput, has questioned Rhea Chakraborty and has obtained "deleted WhatsApp messages" allegedly indicating dealings in banned drugs from her phone.

Rhea has been questioned by the ED about these suspect drug deals and her statement on these allegations has been recorded by it under the Prevention of Money Laundering Act (PMLA), officials said.

Her lawyer Satish Manehsinde had vehemently denied the allegations made against the 28-year-old actor. "Rhea has never consumed drugs in her life ever. She is ready for a blood test," Maneshinde had said. Rhea is the prime accused in this case and has stated in her petition before the Supreme Court that she was in a live-in relationship with the actor. The ED had shared these alleged drug links with the CBI too.