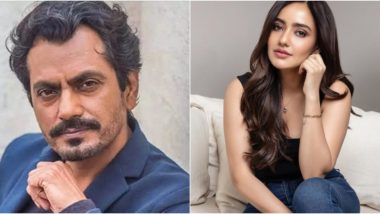 Nawazuddin Siddiqui who received glowing reviews for his recent Netflix film Raat Akeli Hai is all set to be seen in a romantic-comedy film next. The actor was recently seen in the role of a cop in the Netflix drama and will now be seen in a much lighter film next. The film titled Jogira Sara Ra Ra will star Nawaz along with Neha Sharma and more details of the upcoming film have now been confirmed. To be helmed by Kushan Nandy, the film is set to begin its shoot from February 2021. Raat Akeli Hai Movie Review: Nawazuddin Siddiqui and Radhika Apte’s Netflix Film Keeps You Guessing Till the End.

Trade analyst Taran Adarsh took to Twitter to reveal details about the film and revealed that the romantic comedy will be shot across locations of Lucknow, Mumbai and Benares. Considering the current situation with coronavirus, it looks like the film may have been pushed for February 2021 shoot. Previously, we had spotted Nawazuddin along with Neha Sharma at a suburban restaurant as they met for a reading session. The film's title has now been confirmed and we bet you can't wait to see Nawaz in a rom-com again after Motichoor Chaknachoor. Raat Akeli Hai: Nawazuddin Siddiqui's Inspector Jatil Yadav Shows Us It Was Never About Being 'Fair' And 'Lovely!'.

ANNOUNCEMENT... #NawazuddinSiddiqui and #NehaSharma to star in a rom-com... The film - titled #JogiraSaraRaRa - will be directed by Kushan Nandy... Produced by Naeem A Siddiqui... Kiran Shyam Shroff is Creative Producer... Starts Feb 2021 in #Lucknow, #Benaras and #Mumbai. pic.twitter.com/fsdMrkgm6P

The film will be produced by Naeem A Siddiqui and Kiran Shyam Shroff. As for Neha Sharma, the actress was recently seen in a powerful role in Voot Select's Illegal where she essayed the role of a fierce lawyer. On the film front, she was last seen in Tanhaji: The Unsung Warrior.

(The above story first appeared on LatestLY on Aug 10, 2020 01:44 PM IST. For more news and updates on politics, world, sports, entertainment and lifestyle, log on to our website latestly.com).