Raat Akeli Hai: Nawazuddin Siddiqui's Inspector Jatil Yadav Shows Us It Was Never About Being 'Fair' And 'Lovely!'

Hope you did not missed out on is the subtle dig that Nawazuddin Siddiqui-Radhika Apte's movie took on India's obsession with fairness creams. 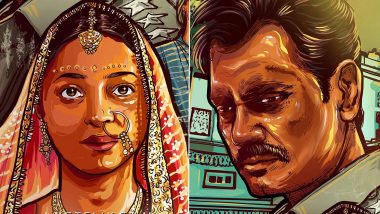 Nawazuddin Siddiqui and Radhika Apte's Netflix whodunit, Raat Akeli Hai is gaining a good response. The genre has always been loved by the cinephiles and comparisons ought to be made with other similar films. Comparisons were made between this film and Knives Out or Nawaz's 'Inspector Jatil Yadav' with his own 'Ganesh Gaitonde' from Netflix's Sacred Games. There were also comments on the length of the film and twists in it. However, between all this chatter what most of them have missed out on is the subtle dig that Honey Trehan's movie took on India's obsession with fairness creams. Yes, I'm talking about that sub plot which was silently running parallel to the murder mystery. Inspector Jatil Yadav's bride-searching process was a statement in itself!

The movie's lighter side sees a fun banter between Jatil and his mother (Ila Arun) over his marriage. It shows how both of them are eager about the subject and trying to make the wedding happen. They try everything from turning 'Jatin' into 'Jatil' to buttering the relatives. But in all this process, we see Jatil's insecurity with his dark skin. He is embarrassed about it, but constantly has a fairness cream while grooming himself. This is fuelled by his mother's so-called-funny and sympathetic comments on his skin colour during their marriage talks. (Spoilers ahead).

I think it is wonderful how the makers showed two sides of Jatil- a tough cop who isn't scared to delve deepest into the case and then there is this insecure, disappointed-with-self kind of person yearning for love. Jatil who is hell bent on having a strictly 'sundar and susheel' bride for himself ends up falling for a mistress (Radha played by Radhika Apte) and that becomes the game changer in his self-love journey. In the course of his case where Radha is one of his suspects, he finds himself again. Jatil and Radha's love story is more about Jatil's perspective of himself than about their chemistry. As Radha reciprocates his romantic feelings, he goes beyond the typical societal norms. Just like he doesn't care anymore about fitting his bride into a mould of 'sundar & susheel,' he also comes to terms with his own appearance. He finds love in himself as he finds love in Radha. The last scene sums this up beautifully where he puts on his goggles with a swagger and throws away the fairness cream in the dustbin, with a more confident body language.

I somewhere wished for the spin-off of this whole story-line that ended positively without making much noise. The concept of 'self-love' or 'self-care' is often related to women and rarely talked about in a man's POV (especially in Bollywood). Recently, we saw Ayushmann Khurrana's 'Bala' (based on premature balding) that also ended up being a talk on self love through a male perspective. As we can hardly see any such plots in the mainstream, we might as well celebrate these little stories in the backdrop! Jatil Yadav's personal tale is a gentle and sweet reminder to not just women but also men that you don't need to be 'fair' and 'lovely' to be successful in a job or love!

(The above story first appeared on LatestLY on Aug 04, 2020 08:27 PM IST. For more news and updates on politics, world, sports, entertainment and lifestyle, log on to our website latestly.com).