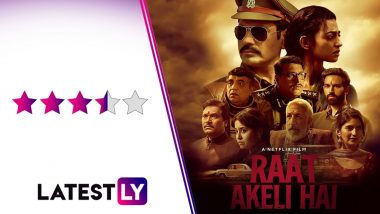 Raat Akeli Hai Movie Review: A murder happens in a rich household. The patriarch himself is killed on the night of his second marriage. Everyone in the house is a suspect. A police officer is determined to find the truth, and the suspects see him as a pesky fly bothering their faces. The pointy edge of the needle of suspicion is on the dead man's second wife. What's more, the cop finds himself irresistibly drawn towards the wife, while the rest of her family wants her out. That's the premise of Honey Trehan's directorial debut, Raat Akeli Hai, starring Nawazuddin Siddiqui and Radhika Apte. Raat Akeli Hai Trailer: Netizens Welcome Radhika Apte to Netflix AGAIN With Hilarious Memes!

Let's answer the most important question on your mind first - is Raat Akeli Hai a remake of last year's Knives Out? As we had already pointed out in an article that covered the trailer, the answer is a No. Both Raat Akeli Hai and Knives Out belong to the same genre - house murder mystery - and both are derivatives of Agatha Christie's works.

While Knives Out play out as more of a tribute to her books and the genre in general, Raat Akeli Hai takes influences, but they are as different to each other as Hercules Poirot is to Sherlock Holmes. Or in this case, Benoit Blanc is to Inspector Jatil Yadav (Nawazuddin Siddiqui). Also, Knives Out is lighter in tone, a black comedy, while Raat Akeli Hai is darker and grittier.

The mystery that Trehan and his writer Smita Singh build up has enough intrigue, with plenty of red herrings. But Raat Akeli Hai goes beyond the usual murder mystery plot with its sociopolitical layering. An idea it actually shares with Knives Out. While Rian Johnson slyly dealt with migrant issues and liberal-conservative fracas, Raat Akeli Hai goes for the usual Indian curses - patriarchy, privilege, sexism, misogyny. Not to mention, society's obsession with fair skin. Ludo, Torbaaz, Dolly Kitty Aur Woh Chamakte Sitare and More; Take a Look at Every Upcoming Movie and Series Coming Straight to Netflix.

Raat Akeli Hai depends heavily on how invested we are in its two principal characters, Radha (Radhika Apte) and Jatil Yadav, and thankfully, they both are well-written parts. Radha is treated as a enigma initially, whose layers are waiting to be peeled off just as the mystery is unfolding. But once the enigma is taken off, Radha becomes an 'outcast', she has been used more than she is accused of using others. Even her new 'saviour' - the cop - has a slight condescending attitude towards her in the beginning compared to treating other suspects. But she is no demure damsel-in-distress, needing in a saviour, just a hurt woman betrayed by the one she loved.

Like Radha, even Yadav is a reject. Despite his mother's (played by a charming Ila Arun) best efforts, Yadav couldn't find a girl to marry, because of his skin colour. In Radha's precarious condition, he sees an opportunity to show a bravado he never gets to don much otherwise. We see him preen the second time he comes to the murder house, as if his newly discovered aggressive gait is his colourful feather-display to impress the peahen. Only the peahen had other things to worry about. Like not getting implicated in a murder.

Therefore, while the central premise is about a murder mystery, it wraps around a dark, unexpected love story that is equally engaging and often taking surprising turns. Speaking more about the suspenseful portions, the 'mystery' in itself may not be mind-blowing as such, as we have seen similar dark films. The prime example that comes to my mind is Manorama Six Feet Under, a remake of Roman Polanski's Chinatown. Interestingly, Nawazuddin had a cameo in that film.

What works for Raat Akeli Hai is its dark character dynamics, not waiting for the finale to unveil how despicable the main characters are, including the murdered man. In fact, the only sympathetic character that you come across in the mansion is the dead man's daughter (Shweta Tripathi). The family members also have the blessings of the town's MLA (Aditya Srivastava), whose daughter is engaged to the deceased's nephew (Nishant Dahiya). With power and privilege on their side, Yadav's job is expectedly made more difficult, especially with his superior (Tigmanshu Dhulia) in the MLA's private payroll.

And yet, in the looming darkness, Raat Akeli Hai still manages to allow a ray of hope to pass through, allowing victories when needed. A rarity in the genre these days. If that isn't enough, a a scene near the end where a character dumps a tube of Fair & Lovely in the dustbin could be seen as a moral victory for many.

In the unravelling of the suspense, Raat Akeli Hai throws light on the inherent sexism showing even the privileged can't claim to be above them. With some nice twists and turns, the movie never allows you to lose attention, even if the pace slackens in between. The climax is well-done, with some very shocking revelations and good buildup.

All the actors do a terrific in their respective roles, with Aditya Shrivastava, Ila Arun and Shweta Tripathi standing out in supporting roles. But the movie truly belongs to Nawazuddin Siddiqui and Radhika Apte, who are masterful as always. Also, they share an amazing chemistry that deserve to be explored in more films.

- Slackening Pace in the Middle

- Some Convenience Tropes in How The Mystery is Solved

Raat Akeli Hai is an engaging mystery thriller with some fanciful elements of noir and excellent performances from both Nawaz and Radhika Apte. The movie is streaming on Netflix.

(The above story first appeared on LatestLY on Jul 31, 2020 12:30 PM IST. For more news and updates on politics, world, sports, entertainment and lifestyle, log on to our website latestly.com).