Johnny Lever celebrates his birthday today and we celebrate him with these comedy scenes from his movies.. 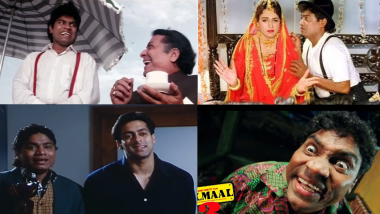 Watching Johnny Lever in nearly every other movie in the 90s often made us wondered how does he always gets the punches right. Why is there no burnout? Even when his funny lines are borderline offensive, we laughed and liked him in movies like Khiladi or Baazigar where the tone was intense. He was a comic relief then but for us, he was perhaps the first actor we came to know as a comedian. Johnny Lever still has his punches perfectly set and can make you go wild with laughter. Picture the Golmaal series as the recurring character of Pappi bhai.  Golmaal Again Becomes the First Bollywood Film to Re-Release in New Zealand Theatres!

Johnny Lever is actually John Rao and he got the other name for mimicking his seniors in Hindustan Lever. His humble beginnings gave Lever enough fodder to weave in his over-the-top portrayals in the 90s. Today on his birthday, let us show you a few comedy scenes of this great actor that will remain unmatched.

The list had to begin with Baazigar. He played Babulal where he can't remember much. The scene which is our favourite is the one where he serves tea with tea leaves in it. Here's a basket of all his funny scenes from the film. Do note the one we were talking about

It's crushing to know on your wedding night that your wife can only say Abba dabba jabba. Lever's realisation makes for such a crazy scene. Yes, it's slightly offensive but please blame the 90s for that. Making fun of anything unusual was a staple in movies then. Fortunately, it's not the 90s anymore.

We all have a friend or two who is paranoid enough to pop pills for even a slight change in body temperature or more. Lever did such a stupendous job. The scene where Salman and he realise that they are meeting only old folks of a hilly town, how Lever mimics the walk of their caretaker and also the famous Kutta khasi.

The famous 'Tu kiske saath hai' joke which had gone viral is due to Johnny Lever and Kader Khan. This scene where he pretends to be on his boss's side in a conversation with Govinda can make anyone ROFL.

Pappi bhai and his antics stand out in this movie which in itself is a comedy movie. His split personality condition lends to a lot of comic situations and this is our favourite.

There are many movies where Johnny Lever has done exceptional work but these are our favourites. What about you?

(The above story first appeared on LatestLY on Aug 14, 2020 08:40 AM IST. For more news and updates on politics, world, sports, entertainment and lifestyle, log on to our website latestly.com).