In her exclusive conversation with LatestLY Bollywood star Juhi Chawla talks about the victory of OTT space in terms of storytelling and breaking the norms in decisively rebellious ways! 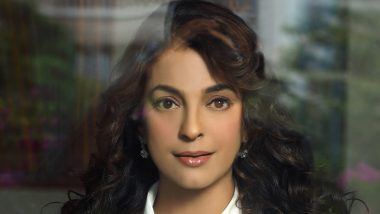 Juhi Chawla firmly believes that everything has its own sweet time and the perfect place to bloom.  For years Juhi has been employed in roles that have religiously exploited her famous chirpy persona and her 'innocent' beauty. The 54-year-old has played some hatke characters in her endeavors in the recent past where she tried to experiment with the narrative and the way it was presented, but she believes things are changing radically in the ever growing content creation business.

In her exclusive conversation with LatestLY Juhi was talking about the evolution of the OTT space and how it has acted in favor of the performer who either played the heroines or the mother of the lead actors. "Earlier Bollywood would put you into a box where you played a heroine, and over a period of time the same heroine had to play a mother as she graduated further, there was nothing in between!! Today there are multiple stories with multiple characters who are multi-faceted across all age groups. It's wonderful and grateful that this transition is happening in our lifetime," confessed Juhi. Hush Hush Review: Scant Twists in Juhi Chawla, Kritika Kamra's Series Undermine an Otherwise Decent Show (LatestLY Exclusive)

Juhi is visibly excited about her Amazon Prime Video thriller show Hush Hush which brings the Big Little Lies vibes to Delhi-NCR. The show spins a web of lies, deceit, and dark delicious secrets. The project has been led by an all-woman cast. It is directed by Tanuja Chandra, the famed director of dark thrillers such as Dushman and Sangharsh. "I am only glad about the fact that we (actors) are still wanted. Fans want to see our work and I always have respect in my heart for the adulation and the work I am getting. Women have come far in every depaertment of storytelling" she added. Hush Hush Trailer: Juhi Chawla, Soha Ali Khan, Shahana Goswami, Kritika Kamra, Karishma Tanna’s Amazon Prime Series Promises to Be a Gripping Murder Mystery (Watch Video)

"While we may celebrate our work and the offers coming along with myriad new opportunities, all of this is not possible unless you have a nice story to tell, the absolute labor of the writers invested, and the daring vision of the makers. In that sense OTT as indeed the new age films are opening many doors to tap the potential," she concludes.

(The above story first appeared on LatestLY on Sep 28, 2022 06:24 PM IST. For more news and updates on politics, world, sports, entertainment and lifestyle, log on to our website latestly.com).