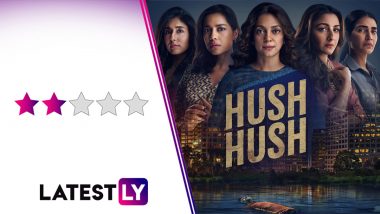 Hush Hush review: Watching Amazon Prime's latest seven episode series called Hush Hush made me wonder if the makers were trying to create India's answer to Big Little Lies. The tropes match with women at the centre, some mishaps, loyalties being tested, friendship tested and much more. Well, Hush Hush could have come close to it if it didn't have such a clumsy  execution. Hush Hush Full Series Leaked on Tamilrockers & Telegram Channels for Free Download and Watch Online; Juhi Chawla, Soha Ali Khan’s Crime Drama Is the Latest Victim of Piracy?.

Ishi (Juhi Chawla) a wealthy PR consultant, is exposed as corruption stories surface on National TV. Her best friends Zaira (Shahana Goswami), Saiba (Soha Ali Khan) and Dolly (Kritika Kamra) are left stunned by this revelation. As if that wasn't enough, two deaths rock their world further. Lot of skeletons crawl out of the closet as cop Geeta (Karishma Tanna) investigates the deaths, including a shady shelter home run by Meera (Ayesha Jhulka).

Hush Hush is co-directed by Tanuja Chandra, Kopal Naithani and Ashish Pandey while Juhi Chaturvedi shares the writing credits with Chandra, Ashish Mehta and Shikhaa Sharma. Knowing Chandra's work for so many years now, it's only obvious to see such strong female characters at the forefront. It genuinely feels great to watch all the major roles being portrayed by women and none of it is done as tokenism. They are dealt more as a character rather than a gender and that's where Hush Hush becomes a class affair.

The story starts from the deaths which sets the tone just right. No unnecessary meandering. Even the investigation is done in a simple manner without making it look like a superhero feat with pointless dialoguebaazi. So it's easy to find oneself in sync with the proceedings.

But the issues start arising mid-season. As the mystery unravels, the story gets shaky. In a bid to arrive at the conclusion, the writers take several routes but fail to make anything count. Twists are good but they are so far and few that you get bored after a while. Things start getting diverted to people's personal lives rather than the mystery behind the deaths.

There are loopholes in a few characterisations as well. Geeta, the cop, functions like she is only one in the Police Station with just a foul-mouthed smart female boss to report to. She looks for clues and goes for covert operations all by her own. Also, Ishi's journey is very half-baked. They never explain how she became a rich person despite spending her childhood in an orphanage. Harshika Poonacha Thanks Juhi Chawla for Reacting to Her 80s Kannada Film Song (View Post)

The women are stellar performers. Juhi Chawla keeps it classy yet raw while Soha Ali Khan is just fantastic and so is Shahana Goswami. But the scene-stealer is Ayesha Jhulka. It's a pity that actresses like her never got their due in the 90s. She is simply brilliant as a person growing up under the shadow of Ishi. Tanna does the cop act well.

Hush Hush is a great attempt but unfortunately, becomes just another addition to the cliched tropes of the OTT thriller genre. Hush Hush streams on Amazon Prime.

(The above story first appeared on LatestLY on Sep 22, 2022 08:01 PM IST. For more news and updates on politics, world, sports, entertainment and lifestyle, log on to our website latestly.com).