The trailer of Abhay Deol’s upcoming film Jungle Cry is out. 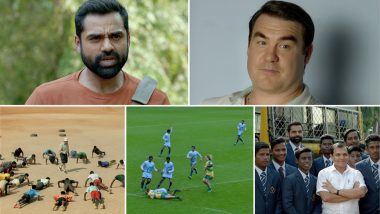 Abhay Deol is back in action, this time as a Rugby coach and we are already falling for that adorable dimpled smile and the intense performance. The trailer of Abhay’s upcoming film Jungle Cry is out. The film is based on the real-life story of Indian rugby coach Rudraksh Jena (essayed by Abhay). The coach, who belonged to the Kalinga Institute of Social Sciences (KISS) in Bhubaneswar, leads a team of rural Odisha boys to a historic win in the Junior Rugby World Cup. Benafsha Soonawalla To Make Her Acting Debut With Abhay Deol-Mithila Palkar Starrer Chopsticks!

One look at the trailer, and we are taken back to Shah Rukh Khan’s Chakde India, where the coach trains an underdog team and leads to the historic victory. The film, though being adapted from a real-life story, seems to be inspired by Chakde.

Have a look at the trailer:

Helmed by Sagar Ballary, the film also stars Emily Shah as a sports physiotherapist. Jungle Cry puts Rugby on the map, which is not a very famous game in India. The movie is bankrolled by Prashant Shah and Shabbir Boxwala. The release date of the film is yet to be revealed.

(The above story first appeared on LatestLY on May 19, 2019 06:04 PM IST. For more news and updates on politics, world, sports, entertainment and lifestyle, log on to our website latestly.com).