Shahid Kapoor's Kabir Singh is being lauded by many but there's particularly one special appreciation post that is sure to make the actor smile wide from ear to ear and it is his wife Mira Rajput's. 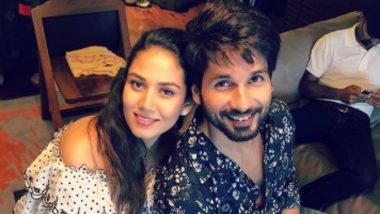 Shahid Kapoor must be over the moon currently considering his recent release, Kabir Singh has received positive responses from the critics. The film which is a remake of famed Telugu film Arjun Reddy has been one of the most-anticipated films of the year, mainly because of Shahid's 'bad boy' avatar in the film. Fans went gaga over the actor's look in the film and found him fit to step into the shoes of Vijay Deverakonda, who was the face of Arjun Reddy. A special screening of the film was held yesterday in Mumbai and apart from the lead cast of Shahid Kapoor and Kiara Advani, several B-town celebs turned up. Kabir Singh Movie Review: Shahid Kapoor Smashes His Way to a Career-Best Performance in This Problematic Love Story.

After the special screening, Bollywood celebs took to social media to share their appreciation for the film but we are sure one particular message must have truly made Shahid smile the most. Shahid's wife, Mira Rajput also took to Instagram to share her views on the film. Posting a still from Kabir Singh, where Shahid looks distraught, Mira wrote a special message for him saying, "Aa zamane aazmaale rooth ta nahi, Faaslon se hausla ye toot'ta nahi. So proud of you baby. It’s your time to shine."

The film which is an intense romantic drama revolves around a Resident Doctor who loses his way after breaking up with his long-time love and drowns himself in alcohol thus leading to a terrible mishap at the hospital. Kiara Advani is seen playing the role of Shahid's lady love, Preeti in the film.  Kabir Singh Advance Booking: Shahid Kapoor and Kiara Advani Starrer Garners Good Response.

Directed by Sandeep Vanga Reddy, who also directed the original film, the film is now in theatres. With what is being touted to be Shahid Kapoor's best performance till date, the film is expected to do well at the box office too.

(The above story first appeared on LatestLY on Jun 21, 2019 08:08 AM IST. For more news and updates on politics, world, sports, entertainment and lifestyle, log on to our website latestly.com).