Kamalrukh Khan Reveals She Was Threatened for Divorce by Late Music Director Wajid Khan, Says ‘His Career Was at Stake, Which Is Why This Never Came Out in the Public’

Kamalrukh concluded by saying that Wajid was not able to meet his family during his last days and he was quite upset about his. The music director breathed his last in May after suffering from a cardiac arrest. 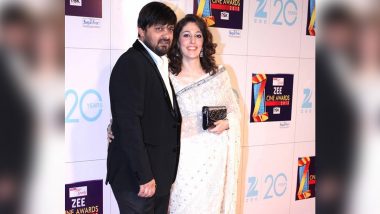 Months after we lost the talented music director Wajid Khan, his wife Kamalrukh Khan made some shocking revelations about the music director and his family. She took to social media to reveal that his family forced her to convert into Islam and talked about the rough patch that she has gone through. Now, during another interview, Kamalrukh opens up about how she was threatened by Wajid and his family when she revolted against it. Wajid Khan's Wife, Kamalrukh, Alleges In-laws Used 'scare Tactics' to Convert Her to Islam.

Khan had already spoken at length about the torture she had been through but with her latest revelation, she revealed that Wajid used to threaten her for divorce when she did not agree to convert. "He was a wonderful man, a talented musician, but if there was one flaw in him, it was this: he wasn’t strong-minded. He could be easily influenced, especially in matters of faith."

She added that the two used to fight about the religion issue a lot and even after having two kids, the fighting did not stop. "This was the narrative, day in and day out," she said. She went on to speak about how Wajid used to abandon her and lived with his family for long periods of time. She was frustrated to a stage where she agreed for the divorce as well. Kangana Ranaut Speaks Up for Late Wajid Khan’s Wife Who Claims That She Is Being Forced to Convert by In-Laws.

"He used to leave and stay at his mother’s house, sometimes for months on end. When he threatened to divorce me, I said ‘fine, let’s go ahead’. Even in court, I made my case about being under pressure to convert. His career was at stake, which is why this never came out in the public, but this had been going on since 2014," revealed Kamalrukh.

Kamalrukh concluded by saying that Wajid was not able to meet his family during his last days and he was quite upset about his. The music director breathed his last in May after suffering from a cardiac arrest. He was also tested positive for coronavirus and was battling the same at the hospital.

(The above story first appeared on LatestLY on Dec 20, 2020 04:46 PM IST. For more news and updates on politics, world, sports, entertainment and lifestyle, log on to our website latestly.com).