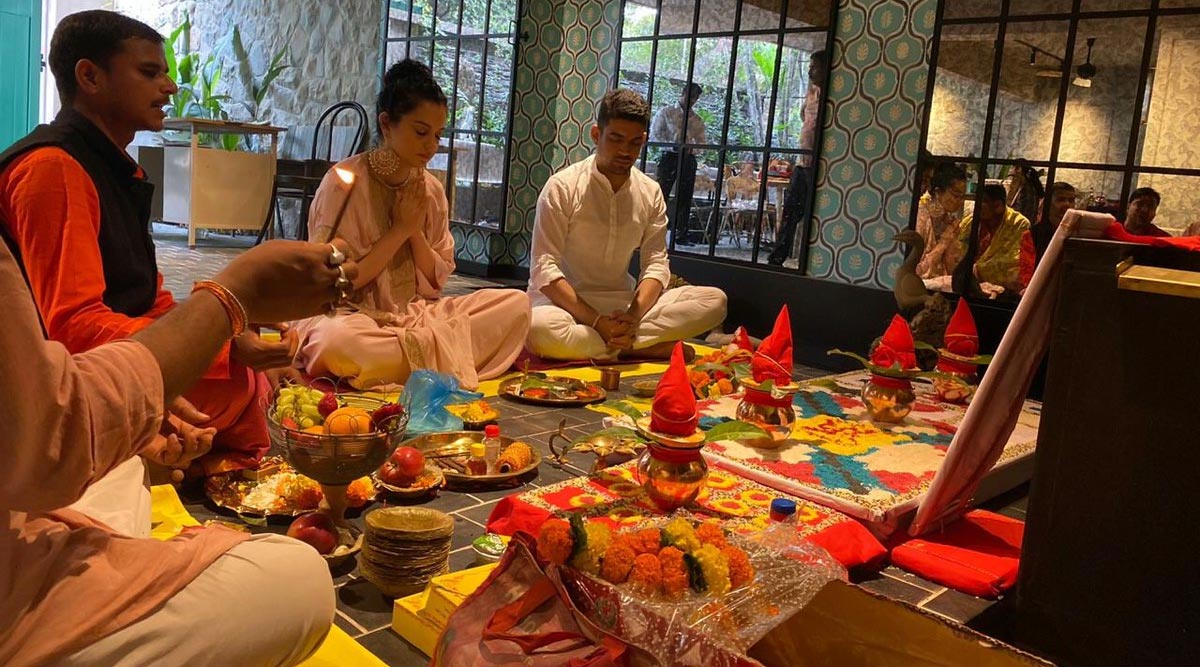 Adding another feather to her cap, actor Kangana Ranaut on Wednesday launched her production company -- Manikarnika Films at Pali Hill in Mumbai. Kangana's sister Rangoli Chandel took to Twitter to share the pictures and a short video of the production studio. Designed by Shabnam Gupta, studio of Manikarnika Films has three-floors of which a sneak peek of only one was shot by Chandel and was shared on her Twitter account. Makar Sankrant 2020: Steal Some Festive Styles From the Closets of Deepika Padukone, Kriti Sanon, Kajol Devgan, Tara Sutaria and Kangana Ranaut – View Pics.

"This is Kangana's studio in Pali Hill prime location in Mumbai; she saw this dream 10 years ago and today we also saw it, if people can achieve everything with honesty and truth why do people do choti moti bundlebaazi and act so dishonest," Chandel tweeted. Chandel also shared pictures from the inauguration ceremony of the production house where Kangana is seen sitting and conducting prayers as a part of the inauguration ceremony. For Kangana Ranaut, It’s Just Another Day With Two Resplendent Ethnic Styles!

Today we inaugurated Kangana’s studio, Manikarnika films Kangana will work as a producer and director and Aksht will look after legal and finance departments he studied film production in New York film academy 🙏 pic.twitter.com/HS1XRtMrHM

The actor turned producer and director will next be seen in sports-drama Panga. Ranaut is playing the role of Kabaddi player Jaya Nigam in the upcoming sports drama. Actors Richa Chadda, Jassi Gill and Neena Gupta will be seen playing pivotal roles in the film. Helmed by Ashwiny Iyer Tiwari, 'Panga' is set to hit the big screens on January 24, 2020.