Bebo posted a picture from the sets of her shoot as she flaunts her baby bump in it. The actress was shooting for an athleisure brand and wore pink sportswear for this picture. One can not help but notice Kareena's pregnancy glow. 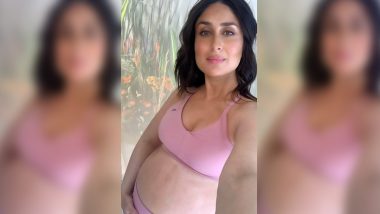 After spending some quality time with Saif Ali Khan and Taimur in the mountains, Kareena Kapoor is finally back to work. The actress who is pregnant with her second child has been busy with several shoots during her pregnancy and it looks like there is no stopping the actress even now. She has become an inspiration for many women and the actress continues to motivate everyone by posting fresh-looking pictures of her on social media from time to time. Bebo Breaks A Sweat: Kareena Kapoor Khan Takes To Street Jogging This Lockdown And We Feel Inspired.

Today, Bebo posted a picture from the sets of her shoot as she flaunts her baby bump in it. The actress was shooting for an athleisure brand and wore pink sportswear for this picture. One can not help but notice Kareena's pregnancy glow that is making her look even more stunning. Kareena added a cute caption to the photo as well. Referring to her baby, she said there are two people on the sets. Check out the post here:

Kareena's friends from the industry were very delighted to see Kareena's gorgeous picture.  Masaba Gupta dropped a comment and said, "Fabbb! It’s insane & commendable how hard you’ve worked through your pregnancy in covid!” Amrita Arora also commented and said, “Stunning” while cousin Riddhima Kapoor Sahni was all hearts for the actress. Taimur Funny Memes Go Viral After Kareena Kapoor and Saif Ali Khan Announce Pregnancy, Memers Get Busy Cracking Jokes on His Popularity Being at Risk With Arrival of New Child.

On the work front, Kareena was last seen in Good Newwz. She was paired along with Akshay Kumar while co-star Kiara Advani essayed the role of Diljit Dosanjh's wife. She is a part of Aamir Khan's much-anticipated film Laal Singh Chaddha. She recently wrapped up the shoot for the film and posted a heartfelt note for Khan and team on finishing the shoot amid the pandemic.

(The above story first appeared on LatestLY on Dec 14, 2020 03:58 PM IST. For more news and updates on politics, world, sports, entertainment and lifestyle, log on to our website latestly.com).