Taimur Funny Memes Go Viral After Kareena Kapoor and Saif Ali Khan Announce Pregnancy, Memers Get Busy Cracking Jokes on His Popularity Being at Risk With Arrival of New Child

News of Kareena Kapoor's pregnancy has given rise a new set of memes from people on Taimur, who is already the paparazzi's favourite child. Meme makers target Taimur to make memes that the new child might steal away his popularity. 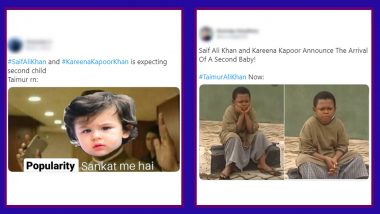 Bollywood couple Saif Ali Khan and Kareena Kapoor have given their fans good news. Kareena Kapoor is pregnant and ready to welcome a new family member. This piece of news has given rise a new set of memes from people on Taimur, who is already the paparazzi's favourite child. Meme makers target Taimur to make memes that the new child might steal away his popularity. Saif Ali Khan, Kareena Kapoor and Taimur all three are among the top trends on Twitter ever since the news broke out this evening. Kareena Kapoor Khan is Pregnant Again! Did You Know the Actress Had Dropped a Hint About Her Second Pregnancy Way Back in 2018?

Meme makers and those who love sharing memes do no really need a target to make memes and jokes. It would not be wrong to say that these very memes and jokes have become the new form of giving out information for some netizens. So as news of Kareena Kapoor's pregnancy was confirmed, netizens targetted Taimur's popularity to make memes and jokes. All the jokes are on how Taimur's popularity will be threatened with the arrival of a new child. It is not new to state how popular is this cute star kid among everyone, having his own fan base. Using the set of popular meme templates, netizens are sharing funny memes on Taimur Ali Khan.

Career is at Risk

#SaifAliKhan is expecting a second child,

Meanwhile #taimuralikhan who was getting all the attention from media till now be like pic.twitter.com/sS54EWGHIt

Taimur to His Sibling

There are a lot of such similar memes that are trending online while also goes on to show how the oncoming child is already becoming popular among the people. The exact details of when the child would be born are not known but fans are already excited, even it means to make memes and jokes.

(The above story first appeared on LatestLY on Aug 12, 2020 08:02 PM IST. For more news and updates on politics, world, sports, entertainment and lifestyle, log on to our website latestly.com).