Storytellers have started exploring topics that bring fresh perspectives to the screen. Mimi, starring Kriti Sanon, is one film based on the subject that has been creating a buzz. Another film, Dukaan, featuring Monika Panwar in the lead, was announced recently. The film is directed by Siddharth and Garima. 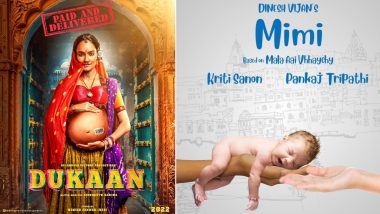 With a growing demand for fresh stories, storytellers have started exploring topics that bring fresh perspectives to the screen. One addition seems to be stories on surrogacy. At some point, it was almost a taboo to discuss the topic, on or off the screen. With mindsets as well as platforms of exhibition opening up with the advent of OTT, Bollywood filmmakers no longer shy from dealing with the subject ion a fictional manner. Mimi: Kriti Sanon Opens Up About How She Lost 15 Kilos in Lockdown Period Which She Gained for Laxman Utekar’s Film.

Mimi, starring Kriti Sanon, is one film based on the subject that has been creating a buzz. The actress plays a young surrogate mother in the film and had even undergone body transformation for her role, putting on 15 kilos. Another film, Dukaan, featuring Monika Panwar in the lead, was announced recently. The film is directed by Siddharth and Garima. Kriti Sanon on Essaying a Surrogate Mother in Mimi: 'It Was Process of Self-Discovery'.

There was also a talk about a film being made on male surrogacy by Raaj Shandilyaa, but nothing concrete has come of it yet. The subject, of course, has been dealt with over the years. Meghna Gulzar made Filhaal in 2002, starring Sushmita Sen, Tabu, Sanjay Suri and Palash Sen. Salman Khan starred in Abbas-Mustan's Chori Chori Chupke Chupke in 2001, with Preity Zinta and Rani Mukerji.

But there was a problem back then, two decades ago. For one, the subject did not find favour with the audience. Plus, there was an issue with the films, too. Filhaal seemed too offbeat for general taste to reach out to the wider audience. Chori Chori Chupke Chupke did reach out to the wider audience thanks to star power, but it was too much of a Salman Khan package, using the subject of surrogacy to merely create a love triangle of sorts between its three stars.

Now, Bollywood is attempting to revive the topic and introduce it to an all-new audience, though cautiously. As of now, there are only two films on the subject. The box office show of Mimi and Dukaan would perhaps decide if newer stories will be explored around the subject of surrogacy.

Here's a look at the two films lined up:

Laxman Utekar, who directed Kriti Sanon in the 2019 rom-com hit Luka Chuppi, calls the shots on Mimi, with the actress in the titular role. The film is a Hindi remake of the Marathi film Mala Aai Vhhaychy. Mimi also features Pankaj Tripathi, Sai Tamhankar, Manoj Pahwa and Supriya Pathak. The film has been extensively shot in Jaipur and is slated to release later this year. A Lavani song is a highlight.

Writers Siddharth-Garima made a mark in Bollywood with their work in films such as Goliyon Ki Raasleela: Ram-Leela, Kabir Singh, Toilet: Ek Prem Katha, Raabta and Batti Gul Meter Chalu. They will direct Monika Panwar in the central role. Monika, who made a mark on the web series Jamtaara, is seen as a heavily pregnant village girl in the film's first-look poster, with a barcode attached to her belly. The film is slated for a 2022 release.

(The above story first appeared on LatestLY on Feb 17, 2021 01:12 PM IST. For more news and updates on politics, world, sports, entertainment and lifestyle, log on to our website latestly.com).