Madhuri Dixit Birthday Special: 7 Underrated Performances Of The Actress That Prove She Is Not Just A Woman With A Dazzling Smile And Fab Dance Moves

Madhuri Dixit is a beautiful actress with a charming smile and dances like a dream. But on her birthday today, we will prove she is more than just that with seven of her performances. 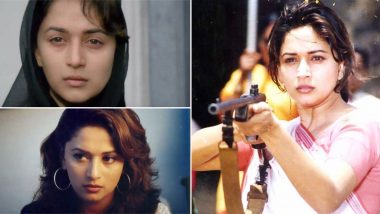 Everytime we talk about Madhuri Dixit, we discuss how beautiful she is or how sparkling her smile is or what a graceful actress she is. If not, we dedicate dance performances to her because till date there hasn't been any actress who can match what Dixit does on the dance floor. But what we unfairly forget to cherish is the performances she has given in many of her movies. Be it a male-centric film like Tezaab or a multi-starrer like Tridev, she has always delivered her 100 percent. Madhuri Dixit Birthday: The Dhak Dhak Girl Previews Her New Single 'Candle' As A Return Gift For All Her Fans (Watch Video).

On her birthday today, we will talk about those performances of Madhuri Dixit that deserved a huge round of applause but have only received a meek 'Good job'. Here're seven underrated performances of this lady who deserves to be worshipped for her skills.

It was a Mithun Chakraborty show but without Madhuri Dixit's innocent portrayal of Laxmi Rao, Mithunda's brat turned good guy Raja act wouldn't have been as effective.

Madhuri Dixit has always played this good next door girl who everyone loves to fall in love with. But here she played a flawed character who gets addicted to drugs. The pain of being betrayed by her husband ignited every scene and you start feeling really bad for her.

Playing a mother at that age was considered suicidal in Bollywood then especially when you have been a leading actress in so many movies. Madhuri Dixit not only did both the roles of mother and the daughter but excelled in them too.

Yet another supremely powerful role of Madhuri Dixit where she was a perfect opposition to Shah Rukh Khan's villainy. One of the brilliants performances of the actress!

This is one of the powerful roles of her career where she wasn't there just to look pretty in the camera. She was an empowering woman who takes up arms to fight for the women of her village.

Madhuri doing something that could hurt the man she loves just because she can't have him was beyond anybody's imagination. She has always played a hero's girl or a wronged woman. But she wronged the man here and did it so well that you will side with her despite the flaws.

Janki could be one of us and yet not what we would like to end up as. Madhuri goes from this giggly besotted girl to a woman who asks her man to give agni pariksha on stage after he doubts her. She outwits herself in the film!

(The above story first appeared on LatestLY on May 15, 2020 08:20 AM IST. For more news and updates on politics, world, sports, entertainment and lifestyle, log on to our website latestly.com).