Mahima Chaudhry Accuses Subhash Ghai of Bullying Her, Reveals He Even Took her To Court

Mahima Chaudhry in her recent interaction has shed light on the current insider vs outsider debate in the industry. The actress accused Subhash Ghai of bullying her but believes if she was from the industry, things would have been different. 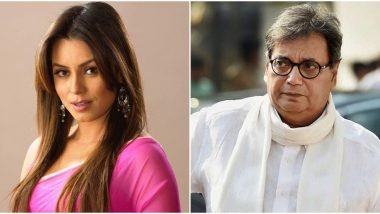 While nepotism in Bollywood is a discussion happening today, the practice was prevalent for a long time. Mahima Chaudhry in fact, reveals how her debut movie director, Subhash Ghai bullied her in her initial days in the industry and how she lost out on a meaty project 'cos of him. The actress in her new interaction with Bollywood Hungama opened up on the kind of bullying she faced in her early days and how actors like Salman Khan and Sanjay Dutt stood by her side.

Narrating details of how she was bullied, Mahima said, "I was bullied by Mr Subhash Ghai. He even took me to the court and wanted me to cancel my first show. It was quite stressful. He sent a message to all the producers that nobody should work with me! If you pick up one of the issues of Trade Guide magazine in 1998 or 1999, there was an ad that he had given which stated that if anybody wanted to work with me, that person would have to contact him. Otherwise, it would be a breach of contract. However, there was no such contract which said that I had to seek his permission." Throwback Thursday: 'Choli Ke Peeche Kya Hai' Song Was Responsible for Subhash Ghai Losing the National Award for Khal Nayak.

Explaining how Salman Khan and Sanjay Dutt stood by her side, Mahima said, "Salman Khan, Sanjay Dutt, David Dhawan and Rajkumar Santoshi were the only four people who stood by me. They all told me to stay strong. David Dhawan called and told me that, ‘Don’t worry and don’t let him bully you.’ Apart from these four people, I didn’t receive a call from anyone else.” This Pardes Song Fooled You Into Thinking Shah Rukh Khan Was Present In Every Frame; Subhash Ghai Spills The Beans!

Finally emphasising on the current insider v/s outsider debate in the industry, Mahima said, "I am sure if I was from the industry, I wouldn’t have been bullied so much. But you have to stand up and fight.” We wonder if Ghai will decide to react to her allegations or will he prefer staying mum instead.

(The above story first appeared on LatestLY on Aug 11, 2020 08:44 PM IST. For more news and updates on politics, world, sports, entertainment and lifestyle, log on to our website latestly.com).