Subhash Ghai in his recent interaction recalls losing the national award for Khal Nayak because of 'Choli Ke Peeche Kya Hai' song. He admits a certain section of the society found this song to be vulgar and hence he couldn't win the award. 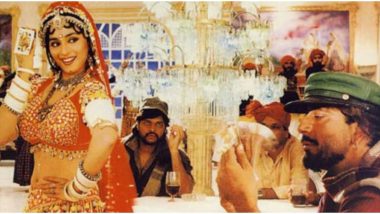 Sanjay Dutt, Madhuri Dixit and Jackie Shroff's Khal Nayak continues to remain a classic even as director Subhash Ghai plans on making a sequel to it. And while the movie had its own share of controversies, Ghai recalls how the inclusion of song 'Choli Ke Peeche Kya Hai' was responsible for him losing the National Award for this movie. And that probably beats any other share of controversies it had witnessed. In his recent interaction with Bollywood Hungama, the ace filmmaker took a trip down the memory lane to witness the mania of Khal Nayak and how the most "disputed" song ended up being everyone's ultimate favourite. This Pardes Song Fooled You Into Thinking Shah Rukh Khan Was Present In Every Frame; Subhash Ghai Spills The Beans!

Ghai in his conversation elaborated on how he faced opposition from 32 different social organisations for the song and why they thought it was something vulgar. Since the filmmaker was determined to retain it at any cost, he ended up losing his National Award. He strongly believes that the inclusion of that song was solely responsible for his award loss but he has no qualms about it. He even recalled how the same song was ultimately responsible for them selling around one crore music cassettes in one week. It was a new record then and the crew was pretty confident about its success.

"It (#Khalnayak) was nominated for National Award also. I lost National Award only because there was #CholiKePeecheKyaHai song because it was very controversial song...": @SubhashGhai1#TalkingFilms #BollywoodHungama

Coming to Khal Nayak sequel, Ghai mentioned he has his script ready and plans to start working on its casting once the lockdown is lifted. While Sanjay, Madhuri and Jackie are expected to return, the sequel will also include a young actor as the new antagonist who will join Dutt. Well, the idea definitely sounds interesting and let's hope it comes to fruition sooner than expected.

(The above story first appeared on LatestLY on May 07, 2020 01:51 PM IST. For more news and updates on politics, world, sports, entertainment and lifestyle, log on to our website latestly.com).