Ajay Devgn’s upcoming sports drama Maidaan will resume in January 2021. Yes, the movie which was severely hit by the pandemic will be back on track in the third week of January. Check out the full story. 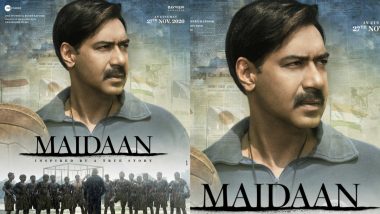 The novel coronavirus led to a mayhem all over the country where even the entertainment industry was not spared. Shoots, celeb interviews and productions of many films came to a halt. Now, slowly and steadily things are getting back to normal, and so is the showbiz. Talking on the same lines, as per an exclusive report in TOI, Ajay Devgn’s upcoming sports drama Maidaan will resume in January 2021. Yes, the movie will go be back on track two months from now on in the third week of January. We bet this is indeed a piece of good news for all Devgn fans out there. Maidaan Gets A New Release Date! Ajay Devgn’s Sports Drama To Hit The Screens On August 13, 2021.

Earlier, Boney Kapoor co-produced Maidaan was severely affected by the pandemic that led to one of the sets of the film getting dismantled. However, now as per the latest updates, a new set (football arena) will be built on the outskirts of Mumbai and the work with regards to the same will commence from the second week of December. Maidaan: The Shooting of Ajay Devgn's Sports Biopic Won't Resume Until November, Confirms Producer Boney Kapoor.

Talking about the film, Maidaan will see Ajay in a never seen before avatar. Earlier, a few reports had hinted that the makers are planning to release the movie on an OTT platform. However, Boney Kapoor denied the same and said that Maidaan will have a theatrical release. Maidaan: Ajay Devgn’s Sports Drama Gets Postponed to 2021?

Helmed by Amit Ravindrenath Sharma and jointly produced by Zee Studios, Boney Kapoor, Arunava Joy Sengupta and Akash Chawla. Apart from Ajay, the movie will see Priyamani as the female lead and Gajraj Rao in a key role. Stay tuned!

(The above story first appeared on LatestLY on Nov 28, 2020 08:31 AM IST. For more news and updates on politics, world, sports, entertainment and lifestyle, log on to our website latestly.com).