Neha Dhupia, Richa Chadha React to the Shocking Viral Video Of Woman Employee in Nellore Getting Attacked by a Male Colleague (Read Tweets) 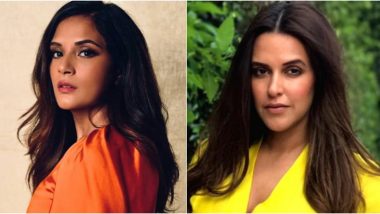 In a shocking incident, a CCTV footage showed a woman employee of a hotel in Nellore under Andhra Pradesh being ruthlessly attacked by her male colleague after she reportedly asked him to wear a mask. The incident occurred on June 27 though a video of the attack has now gone viral on social media. As reported by ANI, a case has been registered against the man under relevant sections but the video has certainly left everyone shaken and also angered. Netizens have been sharing the video asking the man to be punished for this horrible assault. Also reacting to this viral video were Bollywood celebs such as Neha Dhupia and others. Woman Employee in Nellore Under AP Tourism Department Attacked by Male Colleague After She Advised Him to Wear Mask; Shocking Video Caught on CCTV.

Angered by this video, actress Neha Dhupia took to Twitter to react to the same as she questioned how men get away with such things and what ego and privilege triggers them to do so. Taking to Twitter, she wrote, "What’s going on... this man and many more like him if they are out there need to be taught a lesson... everyone knows where his place is ... seriously , where does this entitlement, ego, anger come from!!!" Also among other celebrities who reacted strongly to this video was actress Richa Chadha who also pointed out how the other men in the video are seen calming the attacker instead of the victim. Check out the tweets here.

What’s going on... this man and many more like him if they are out there need to be taught a lesson... everyone knows where his place is ... seriously , where does this entitlement, ego, anger come from!!! https://t.co/WHT4Rk6wb2

Once he’s done hitting her, other unkils walk WITH HIM, leaving the woman alone, lest he need to be comforted after this outburst of violence BY HIM. This is our society. You’re foolish if you think we’re not living in sickness! Sick. #BhaskarTuToGaya #UncleaPleaseSit https://t.co/OkdRchai0l

The shocking video has left Twitterati angered, disgusted by this incident a user wrote, "Shocked to see this horrendous act. What has gone with our society? Most of the men still treat women as a weaker section and always would want to show their power on them. This has to stop now. Hoping that the @APPOLICE100 takes strictest action on him at the earliest."

(The above story first appeared on LatestLY on Jun 30, 2020 04:00 PM IST. For more news and updates on politics, world, sports, entertainment and lifestyle, log on to our website latestly.com).