Chhorii starring Nushrratt Bharuccha, Mita Vashisht, Rajesh Jais and Saurabh Goyal, might be heading towards an Amazon Prime premiere. The movie is a remake of the Marathi film Lapachhapi and marks the entry of Crypt TV into India's cinematic landscape 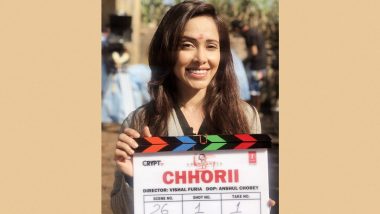 The uncertainty around theatres and is making more movies gravitate towards a straight-to-digital release. Last year we saw Laxmii, Shakuntala Devi, Ludo opting for the OTT route for release. This year Sherni and Toofan were premiered on Amazon Prime. Now we hear Nushrratt Bharuccha's horror movie Chhorii too is taking the same route. A source informs that the film is will be an Amazon Prime release and will be announced during the upcoming Prime Day event. Chhorii: Nushrratt Bharuccha Starts Shooting for Her Upcoming Horror Film in Madhya Pradesh (View Post)

Chhorii is the remake of the Marathi film Lapachhapi and also marks the entry of Crypt TV in India's cinematic landscape. The film was shot in Madhya Pradesh and wrapped up last November. It is directed by Vishal Furia who also helmed the Marathi original. The source says, "The movie has turned out quite well but with the way things are going, an OTT release seems to be the only option now. But rest assured, the Hindi version will be as scary as its original." Did You Know Nushrratt Bharuccha Had Played a Girl with Super Powers in a YRF-Produced Serial?

Chhorii also stars Mita Vashisht, Rajesh Jais and Saurabh Goyal and is a mix of horror and societal beliefs that lead to a fearful environment.

(The above story first appeared on LatestLY on Jul 21, 2021 06:32 PM IST. For more news and updates on politics, world, sports, entertainment and lifestyle, log on to our website latestly.com).