On Yash Chopra’s 88th Birth Anniversary And On 50th Year Of YRF, Aditya Chopra Pens Down A Heartfelt Note

On this day, Yash Chopra’s son, director-producer Aditya Chopra, has not only paid tribute to his late father, but also penned a heartfelt note as YRF celebrates its 50th year. 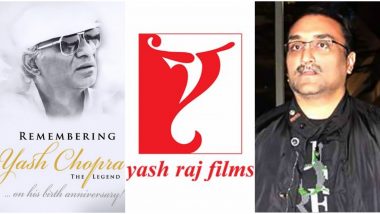 September 27, 2020, marks the 88th birth anniversary of Yash Chopra, the legendary director and producer of Bollywood. The man who has given several memorable films was considered among the best Indian filmmakers. He was honoured with numerous prestigious accolades for his contributions in the world of cinema, including the Dadasaheb Phalke Award in 2001 and the Padma Bhushan in 2005. This day is also special as Yash Raj Films aka YRF, the production and distribution company that was founded by the legend, enters its 50th year. On this day, Yash Chopra’s son, director-producer Aditya Chopra, has not only paid tribute to his late father, but also penned a heartfelt note as YRF celebrates its 50th year. YRF Museum in Works to Mark Production Banner’s 50th Anniversary.

Team YRF has shared a video that has a montage of pictures, sharing Yash Chopra’s lovely memories and moments with actors on sets that includes Shah Rukh Khan, Amitabh Bachchan, Rishi Kapoor and Anushka Sharma. While sharing this video, it was captioned as, “His cinematic brilliance is an inspiration for generations to come. His storytelling was passionate & all heart. Remembering the celebrated legend #YashChopra on his 88th birth anniversary.” Yash Chopra Birth Anniversary: 7 Movies Directed By The Legendary Filmmaker That Led To South Remakes.

On YRF’s 50th year, “50 years of celebrating movies, 50 years of entertaining you”, Aditya Chopra has penned down a heartfelt note. He has not only mentioned about his father Yash Chopra’s journey in the world of cinema but also thanked all the actors, directors, writers music directors, cinematographers, choreographers, technicians, executives and employees, all those who have been associated with Yash Raj Films throughout these years.

Aditya Chopra concludes his note saying, “This is not only YRF’s success, it’s the success of the Indian Film Industry, which gave the platform for a self-made man to create a self-reliant, truly independent studio of the world.”

(The above story first appeared on LatestLY on Sep 27, 2020 10:03 AM IST. For more news and updates on politics, world, sports, entertainment and lifestyle, log on to our website latestly.com).