Yash Chopra's movies were all about hope, vibrance, colour, and most of all love. But the movies directed by him that didn't have these things in focus got many remakes in the South. On his birth anniversary today, let us tell you seven such remakes of his moves. 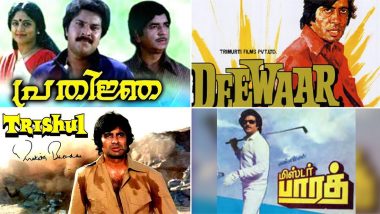 iWhenever we think about Yash Chopra, it reminds us of good music, plush locales, beautiful heroines in career-defining roles, love stories and some epic dialogues. But before this filmmaker, turned completely towards enriching Bollywood with his romantic tales, he has made movies that spoke about the society, establishments and can be seen as a social commentary on the big economic divide in our county. In fact, Ittefaq is perhaps his only that didn't have any songs. Such was the euphoria and the popularity of these movies that they got many remakes in different languages in India and abroad. The South Indian film industry seemed particularly enamoured by Chopra's work as they remade a lot of his movies. YRF to Announce Mega Project Slate on Yash Chopra’s Birth Anniversary, Projects May Include Collaborations with Shah Rukh Khan, Ajay Devgn and Others

Now Chopra has worked a lot with Amitabh Bachchan and a lot of the actor's movies with the director lent itself to South remakes. So while today we remember his movies fondly on his birth anniversary, let us also tell you about these remakes that you may not be aware of.

The theme of a Muslim raising a Hindu boy formed the premise of Chopra's debut directorial. The movie was remade in Telugu titled Jeevana that starred Krishnam Raju, Vanisri, Jayasudha, Sivaji Ganesan and Kongara Jaggaiah.

The concept of lost and found was a favourite of nearly every filmmaker back in the late 60s and the whole of 70s. Waqt released in 1965 and reintroduced the genre in such a way that the movie became an instant hit. Laced with amazing music and a star-studded ensemble cast, Waqt became a blockbuster. It was then remade in Telugu as Bhale Abbayilu in 1969 and in Malayalam as Kolilakkam in (1981).

Deewar sealed Amitabh Bachchan's angry young man moniker even further and became such a sensation that it has nearly five-six remakes. If we talk only about south remakes, it was Magaadu in Telugu starring NTR, Thee in Tamil with Rajinikanth in the lead and Nathi Muthal Nathi Vare in Malayalam with Mammootty in the lead. It also has a Turkish version and was remade in Hong Kong as well. Deewar could probably be the most remade movie of Yash Chopra.

Trishul that told the story of a son's revenge against his father who abandons his pregnant mother caught the eyes of Tamil and Telugu filmmakers. So both the industries named the movies Mr Bharath. While the Tamil version had Rajinikanth in it, the Telugu movie starred Sohan Babu.

Daag was an on-screen adaptation of Thomas Hardy's novel The Mayor of Casterbridge that starred the heartthrob of the nation Rajesh Khanna with Sharmila Tagore and Rakhee. What I remember of the film is the soothing  music and a very complicated love triangle. The movie found a Telugu version titled Vichitra Jeevitham.

Mashaal is the fight for justice, a fight to out the miscreants. All that leads to life altering and life threatening repercussions that changes the man who once only believed in being righteous. What society and its evils can do to an honest man is what Mashal was all about which got a Malayalam remaked titled Ithile Iniyum Varu. It starred Mammootty.

Chopra's Darr itself borrows heavily from Hollywood film Cape Of Fear with Shah Rukh Khan playing the stalker who would do anything to make Kiran (Juhi Chawla) his. The film was remade in Kannada as Preethse and in Tamil as Chinna.

It's not surprising to note that Chopra's movies once upon a time spun so many remakes because the director believed in showing a side of the society or our psychology that hits close to home.

(The above story first appeared on LatestLY on Sep 27, 2020 08:40 AM IST. For more news and updates on politics, world, sports, entertainment and lifestyle, log on to our website latestly.com).