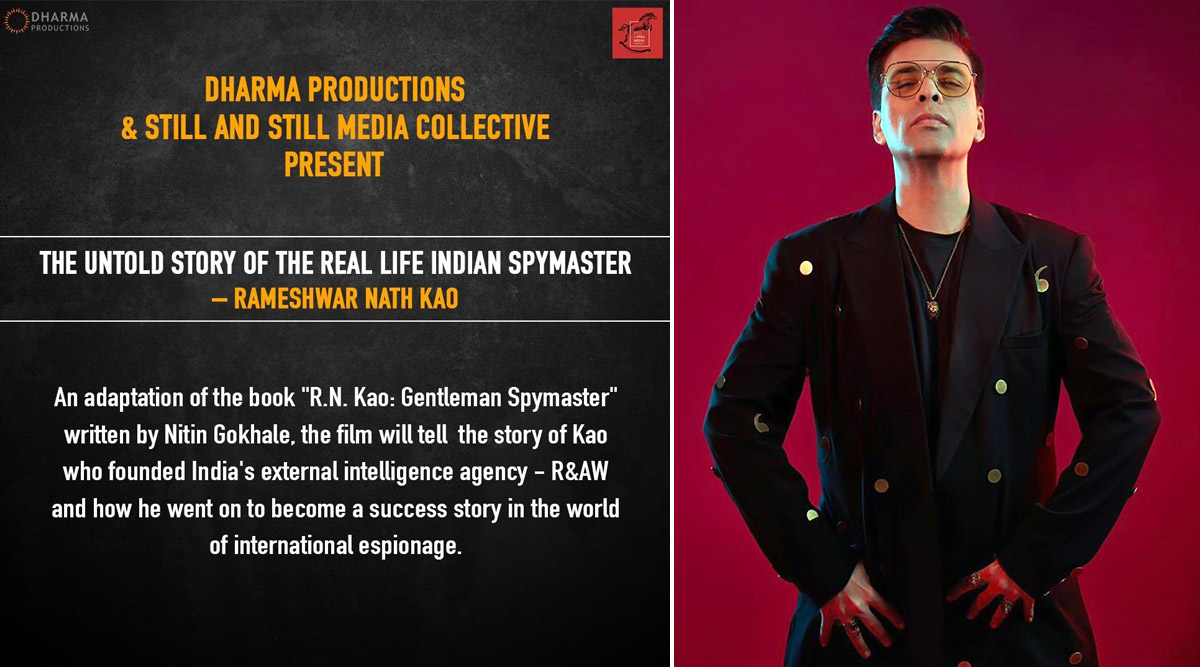 Indian cinemas favourite Karan Johar has made a major announcement on his next production venture. The director-producer has confirmed a film on real life Indian Spymaster – Rameshwar Nath Kao aka RN Kao. He was the first chief of the country’s external intelligence agency, the Research and Analysis Wing (R&AW). While sharing this big news, KJo wrote, “Turning pages into frames, one thrill at a time. Bringing to you an adaptation of Nitin Gokhale’s book - “R.N.Kao: Gentleman Spymaster” to the silver screen. More information coming soon!” Rangoli Chandel Takes a Sly Dig at Karan Johar’s Takht Says, ‘He Will Depict Aurangzeb Cruelty Through His Abs and Sexual Relationships’.

This upcoming project will be jointly presented by Karan Johar’s Dharma Productions and Still and Still Media Collective. About this project the makers mentioned in a statement, “An adaptation of the book “R.N. Kao: Gentleman Spymaster” written by Nitin Gokhale, the film will tell the story of Kao who founded India’s external intelligence agency - R&AW and how he went on to become a success story in the world of international espionage.” Good Newwz Box Office Collection Day 13: Kareena Kapoor-Akshay Kumar's Film Earns Rs 177.31 Crore.

Turning pages into frames, one thrill at a time.

R.N. Rao during his career also served as the personal security chief to Prime Minister Jawaharlal Nehru and as a security adviser to Prime Minister Rajiv Gandhi. Kao was known to be an ‘intensely private man’. We are eagerly waiting to know who which actor would be roped in to play the role of this spymaster. Meanwhile, the other projects that would be produced under Dharma Productions include Bhoot – Part One: The Haunted Ship, Gunjan Saxena: The Kargil Girl, Sooryavanshi, Brahmastra, Shershaah, Takht and Dostana 2.