As Salman Khan and Jacqueline Fernandez's song, Dil De Diya from Radhe is out, here, we look at other hit tracks of the duo which prove they're just too good together. Check it out. 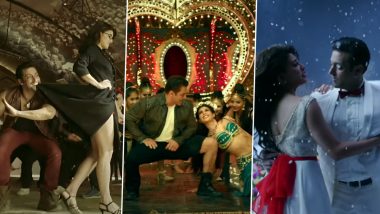 Bollywood superstar Salman Khan has this Midas touch and you understand what we mean, right? His upcoming film Radhe is one of the most anticipated films of the year. The movie will release in theatres as well as ZEE5's ZEEPlex on May 13 (Eid 2021). And so with an aim to create hype among fans, the makers are releasing songs from the movie every day. On April 30, Dil De Diya starring Salman and Jacqueline was unveiled by the makers, and wow, what a fun track. Radhe Song Dil De Diya Out! Salman Khan and Jacqueline Fernandez Steal Your Heart With Their Sizzling Dance Moves (Watch Video).

However, Salman and Jacqueline's chemistry in Dil De Diya reminds us of all the other numbers which starred them together. Be it Kick's Jumme Ki Raat or Race 3's Heeriya, Salman-Jacqueline's magic has always worked on screen and we bet their latest song is also going to super se upar. Here, check out the duo's other tracks below. Before Radhe's Dil De Diya, 5 Musical Chartbusters Himesh Reshammiya Had Composed For Salman Khan That Left Us Impressed (Watch Videos).

From the movie Kick, this fast song starring Salman and Jacqueline is hot, hot and hot. Right from the costumes to the choreography, it definitely sees the two stars at their dance best.

Yet another track that is high on energy starring Salman-Jacquline. This is from the movie Race 3 and just have look at their moves.... you'll definitely be stunned.

Just like the name, you'll get hooked to this ah-mazing song starring the beautiful pair Salman and Jacqueline. It's a romantic number from the movie Kick. Smokin' hot is the word!

If you've ever fallen in love, this melody where Salman and Jacqueline serve you a fab performance will melt your heart. It's a slow track with meaningful lyrics. Watch.

Let's end it on a Selfish note. The below song also has Bobby Deol, but it Salman and Jacquline's pyaar that is the highlight of the track. There are moments in the song which are just wow. Have a look.

These are some of the most popular songs of Jacquline and Salman together. Meanwhile, talking about Radhe's Di De Diya, it definitely looks like a blockbuster as it extravagant as well as a typical Bhaijaan song. Stay tuned!

(The above story first appeared on LatestLY on Apr 30, 2021 02:09 PM IST. For more news and updates on politics, world, sports, entertainment and lifestyle, log on to our website latestly.com).