Rajkummar Rao Grooves to Shah Rukh Khan’s Baazigar Song Yeh Kaali Kaali Aankhen, This Video From the Sets of Made in China Is Sure to Win Your Hearts 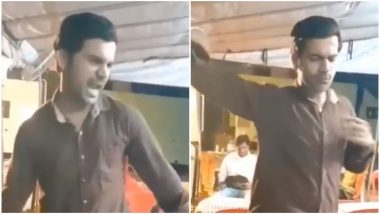 Rajkummar Rao is one of the most talented and versatile actors of this age. Despite unconventional looks and a guy next door personality, the actor has made it big in Bollywood. In fact, with movies like Kai Po Che, City Lights, Newton, Rajkummar has become one of the bankable actors in B-Town. Rajkummar, who is riding high on the success of his latest entertainer Stree (a horror comedy), is currently busy shooting for Mikhil Musale's Bollywood directorial debut Made In China in Ahmedabad. However, the actor has taken some time off the busy schedule to record a video, where Rajkummar is seen grooving to his most favourite actor Shah Rukh Khan's Baazigar song Yeh Kaali Kaali Aankhen. Rajkummar Rao Gets Asked About the Kinkiest Thing in His Bedroom and His Reaction Is Priceless – Watch Video

The actor, who is dressed in his character for his upcoming film Made In China, is sure to impress you with his funny and cute expressions. This is indeed the cutest thing I saw on the Internet today. You'll agree with me when you will see the cute expressions of Rajkummar as he dances his heart out to the tunes of Yeh Kaali Kaali Aankhen.

On the professional front, Rajkummar Rao is one of the busiest actors; He has back to back film releases. The actor, who was last seen in Amar Kaushik's Stree alongside Shraddha Kapoor, will be next seen in Made In China, playing the role of a Gujarati businessman. Rajkummar also has Ek Ladki Ko Dekha Toh Aisa Laga, co-starring Sonam Kapoor and Mental Hai Kya alongside Kangana Ranuat. Hansal Mehta's Turram Khan is also in the pipeline. Watch this space for further updates.

(The above story first appeared on LatestLY on Oct 09, 2018 01:02 PM IST. For more news and updates on politics, world, sports, entertainment and lifestyle, log on to our website latestly.com).