SD Burman's brand of music went away with him and left us deprived of music in its true sense. His unique ability to blend raagas with folk sounds is still unmatched. Today on his birth anniversary, let's talk about his obsession with Rabindranath Tagore. 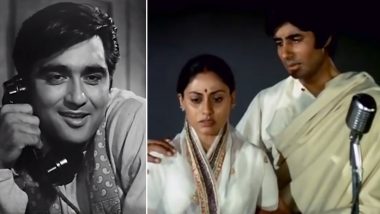 Composers and singers like S D Burman are rare. It's as if God threw away the mould after creating them. At an age where music is filled with bad lyrics and terrible compositions, S D Burman is what we miss the most. The composer's biggest asset was fusion. Being a trained musician, he was inclined towards classical music and always used Ragas to define his arrangements. He even fused folk with modernism to create some of the best tunes Hindi Cinema has ever produced. His compositions in Bandini, Jewel Thief, Sujata and others still have the power to transport us to a land where music heals. The influence of Rabindra Nath Tagore's writings and songs in his composition was quite evident. Many of bard's tunes were tweaked here and there to get included in Burman's songs. Agnee Pays Tribute to Legendary Composers RD Burman and SD Burman

On his birth anniversary today, we will talk about five such songs of SD Burman that are inspired by Kobiguru's tunes. Rhea Chakraborty Seeks Inspiration From Rabindranath Tagore’s Gitanjali, Shares a Powerful Quote About Faith

You will need to be patient to spot the similarities between both songs. But you will definitely realise that the mukhda of the Do Bhai track is heavily inspired by Bard's tunes.

There's no doubt how similar these two tracks are and such beautiful words. The Hindi track was sung by Suraiya.

Burman picked the essence of the Tagore song and simplified the arrangements further for this one of the best romantic moments in film history. Confessing love over a phone call...ah such good old days!

The first line of the Burman track can be immediately traced back to this wildly popular Rabindra Sangeet.

Any Bengali would have guessed the similarities here. A gem both in Hindi and Bengali! This song gets our heart every time hear it.

We are sure we have missed out on a few gems created by SD Burman that are inspired by Tagore's words and music. Do let us know in the comments below.

(The above story first appeared on LatestLY on Oct 01, 2021 09:40 AM IST. For more news and updates on politics, world, sports, entertainment and lifestyle, log on to our website latestly.com).