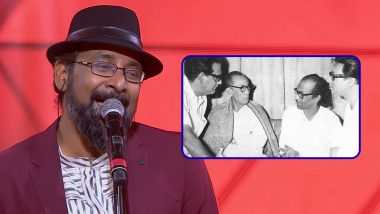 Popular band Agnee has honoured legendary composers RD Burman and SD Burman in a musical way. Agnee recreated SD Burman and RD Burman's songs - "Roop tera mastana" and the four-song completion medley from "Hum Kisise Kum Naheen" respectively, for a digital show. Talking about why they decided to recreate these songs, Koco of Agnee said: "RD Burman was light years ahead of his times not just for his compositions, but also in terms of the sounds that he introduced into film music in those days. So when it came to recreating his tracks, it was not only a privilege but also a bit of a scary proposition. So we chose to stick to the Agnee sound which is essentially rock for recreating both the tracks as it comes to us most naturally." Sachin-Jigar Recreate Euphoria’s Evergreen Song Maeri for the Upcoming Season of MX Player’s Times of Music

"Listening to both the songs, kept transporting me back to my childhood and teenage years. I feel music is like an index of life, and certain songs are like the titles of some chapters. Those were certainly the happiest and most carefree yeas of my life. I relived the same carefree happiness while working on this project," he added. His bandmate Mohan Kannan had great fun working on the project. Saath Do Music Video: Shaan, Anuradha Palakurthi’s Inspirational Song Is All About Hope and Togetherness In the Times of COVID-19 (Watch Video)

"With 'Roop tera...', I wanted to try and do something with setting the mood before the song starts, and the second antara's words 'Bechain hokay toofan jaise' felt like they were setting up the picture before (actors) Rajesh Khanna and Sharmila Tagore were in the house. So we started with a storm kind of setting and these lyrics sung in a newly composed tune. "

"Koco of course had his signature riff style on this and had his trademark singing guitar solo as well, both of which set our sound apart every time he plays. We also wanted to do something with 'Rok raha hai humko zamaana, door hi rehna', so we created a 'the world against me' kind of a feeling, with all the instrumentalists going a little mad in that section before finally allowing me to sing," explained the singer.

Further elaborating on how they worked on the classic numbers, Mohan shared: "With the medley, it was slightly trickier, as the songs were originally composed separately and just started one after the other without blending into each othera In the film, it was a competition between two different characters so the songs didn't need to blend. Now we had to put all the songs together into one seamless blend with just me singing all of it, and that was fun to do, with the bridge between two songs being either my sargams or Koco's guitar."

The most fun they had in the medley was with "Tum kya jaano", with Mohan looking at taking it into the qawwali space and Koco then coming up with the idea of African chants on it. "Varun, our percussionist, was ready with one as soon as Koco gave us the idea and we were good to go," said Mohan.

(The above story first appeared on LatestLY on Jul 05, 2020 05:50 PM IST. For more news and updates on politics, world, sports, entertainment and lifestyle, log on to our website latestly.com).