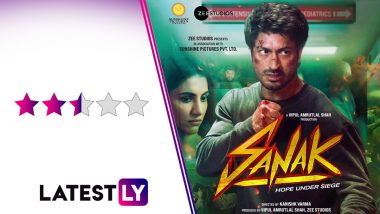 Sanak Movie Review: Jake Peralta won't be happy! Bollywood might have remade a lot of movies. I mean, a lot of movies. But for some strange reason, it was smart enough not to remake Die Hard, the cult classic action movie that turned Bruce Willis into star. An Aamir Khan movie called Baazi came close, but the similarity was restricted only to the third act. But now, Vidyut Jammwal's Sanak breaks that taboo and brings Die Hard to Bollywood, albeit making some cosmetic changes. Sanak: Before Vidyut Jammwal’s Action-Thriller, Did You Know Bruce Willis’ Die Hard Had Also Inspired an Aamir Khan Movie?

So Nakatomi Plaza is now Green Hills Hospital. The hero Vivaan (Jammwal) is not an everyday cop going to meet his estranged wife, but an MMA trainer whose wife Anshika (Rukmini Maitra) has just recovered from a serious heart condition. Is the medical condition important to the story here? You could have brought the leads into the hospital even if one of them was suffering from dysentery. But I guess loose motions won't give that kind of an emotional punch the needless opening sequence gives to Sanak.

So anyway, while the wife is about get discharged, a bunch of terrorists led by Saju (Chandan Roy Sanyal) storms into the hospital and takes everyone hostages. Their mission is to escape away with an arms dealer, who is being operated at that very hospital. While the cops are outside helpless, it is up to Vivaan, who has managed to keep himself away from the terrorists' radar, to rescue his wife and the rest of the patients there.

We also have Neha Dhupia, sporting a perennially stoic expression, play a cop in charge of the hostage crisis, and call it a very Bollywood coincidence, she also has someone dear inside the hospital! But then Sanak, directed by Kanishk Varma, is the kind of film that you shouldn't really take serious. It is a film where a kid, who is an avid PUBG gamer, has become an expert enough to know how safety in a gun works and can even defuse a bomb. I wonder what it says about our online gaming culture and the effect it has on our kids.

One other thing that I have to give credit to Sanak for, is that for a change, it doesn't make the terrorists into a bunch of Pakistanis, but rather they make a very curious bunch of mixed ethnicities. That said, I still can't get over my biggest peeve about the movie.

Remaking Die Hard in such a melodramatic manner is a sacrilege enough for me to take off points for the film, but I do have to admit that the storyline does have the potential for Jammwal to unleash his action chops. Jammwal, who owns a couple more expressions and grunts than Tiger Shroff, has been kind of under-utilised in some of his recent movies. But here, there are some fine action sequences where he gets to truly work his magic. The action choreography is impressive, though the designs feel very familiar, not just from Die Hard, but also from films like Hard Boiled, The Raid, and a couple more movies of Scott Adkins and Iko Uwais that I don't remember presently.

So if you are a diehard Vidyut Jammwal fan and haven't seen any of the above movies I had mentioned, I am sure you will be left awed by the end of Sanak. However, for me, Die Hard ranges in the top of my favourite action movies, and seeing Sanak strip it off its ingenuity, calculativeness and inherent suspense, isn't something I can easily ignore.

Just how great was John McClane and Hans Gruber trying to outdo each other verbally through walkie-talkies? Or the nail-biting sequence when Gruber accidentally lands in front of McClane and acts like a hostage? Maybe I should revisit Die Hard again, for Sanak just made that longing feeling stronger by not having any of those sequence that made it a standout. Sanak: Vidyut Jammwal Feels His Upcoming Action Film Will Inspire People To Be a Better Version of Themselves.

Still, it is much fun to see Vidyut do some spectacular stunts with any of the hospital equipments he can get his hands on, and thankfully, the people he is fighting against are also some skilled martial artist. Which is also why I found the final fight scene between Vivaan and Saju to be unintentionally funny. You just can't take it seriously that Chandan Roy Sanyal, no matter how hard he tries to outact everyone here with his theatrics, can ever have an upper hand over Vidyut! Sanyal's Saju is not even smart enough a villain, basically sending all his men to be killed. not even leaving anyone to conveniently keep a tab on where his enemy is in the CCTV room. Maybe he is just reflecting the emptiness that went into writing the scenes that stitched one great Vidyut action scene with another!

PS: I really hope that Vidyut finds a director who cuts out all the needless soap melodrama and heavy-duty emoting scenes, and give the actor more room to showcase his martial arts skills. I want him to own the space that stars like Donnie Yen, Tony Jaa, Iko Uwais, Scott Adkins own outside. Maybe go back to the first Commando days.

While it is unforgivable that Sanak even dared to replicate Die Hard, the action sequences do offer some paisa vasool moments for die-hard Vidyut Jammwal fans. Sanak is streaming on Disney+ Hotstar.

(The above story first appeared on LatestLY on Oct 15, 2021 09:01 AM IST. For more news and updates on politics, world, sports, entertainment and lifestyle, log on to our website latestly.com).