Sanak: Vidyut Jammwal Feels His Upcoming Action Film Will Inspire People To Be a Better Version of Themselves

The makers of Sanak on Tuesday released the trailer of the film directed by Kanishk Varma. It also stars Bengali superstar Rukmini Maitra, Neha Dhupia and Chandan Roy Sanyal among others. 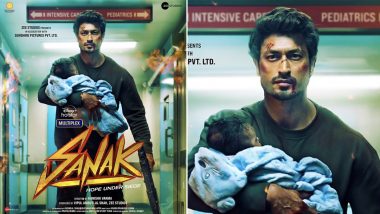 Action hero Vidyut Jammwal is gearing up for the release of his upcoming high-octane actioner 'Sanak: Hope Under Siege'. He says the film will inspire people to be a better version of themselves. The makers on Tuesday released the trailer of the film directed by Kanishk Varma. It also stars Bengali superstar Rukmini Maitra, Neha Dhupia and Chandan Roy Sanyal among others. Sanak Trailer: Vidyut Jammwal Going 'Die Hard' in a Hospital Will Make Your Jaws Drop! (Watch Video).

Fighting to save his loved one from a high-risk situation, in the trailer Vidyut is seen pushing the envelope. Apart from being an action thriller, the trailer of 'Sanak' also touches upon the love story between Vidyut and Rukmini. Vidyut said: "The film was shot during the pandemic time and as every other Indian, we went to work and we have come up with this film. Once you watch it, I can guarantee you that it will inspire you to be a better version of yourself and to help people around you." Sanak: Vidyut Jammwal’s Action Thriller To Release on Disney+ Hotstar on October 15; Check Out New Poster!

Producer Vipul Amrutlal Shah added: "We are so excited to bring 'Sanak' to Indian audiences. Our films really haven't explored the hostage drama space in depth and detail and 'Sanak' is our attempt at doing just that." 'Sanak: Hope Under Siege' is presented by Zee Studios in association with Sunshine Pictures Pvt Ltd and will be streaming from October 15 only on Disney+ Hotstar Multiplex. It is a Vipul Amrutlal Shah production, directed by Kanishk Varma.

(The above story first appeared on LatestLY on Oct 05, 2021 04:16 PM IST. For more news and updates on politics, world, sports, entertainment and lifestyle, log on to our website latestly.com).