On August 11, it was confirmed that Sanjay Dutt has been diagnosed with stage four lung cancer. The 61-year-old even issued a statement that he would be ‘taking a short break from work for some medical treatment’. 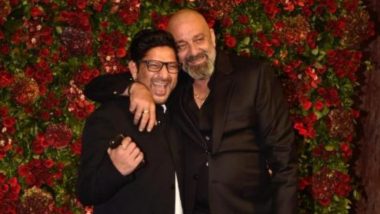 On the evening of August 8, the news broke out that Sanjay Dutt has been admitted to Mumbai’s Lilavati Hospital. As soon as the news splashed across the internet, fans had started wishing him a speedy recovery. It was a huge sigh of relief for family, industry pals and fans, when it was confirmed that the actor has been tested negative for COVID-19. Sanjay Dutt’s oxygen level had dipped due to which he was immediately rushed to the hospital. After it was confirmed that he has been tested negative for the novel coronavirus, it was stated that Sanjay will have to be at the hospital for a day or two for further medical examination, to know why he was low on oxygen saturation. Ranbir Kapoor and Alia Bhatt Pay a Visit to Sanjay Dutt Following His Lung Cancer Diagnosis (View Pics).

On August 11, it was confirmed that Sanjay Dutt has been diagnosed with stage four lung cancer. This was a huge shock for everyone. The 61-year-old even issued a statement that he would be ‘taking a short break from work for some medical treatment’. Arshad Warsi, who has shared screen space with Sanjay Dutt in films such as Munna Bhai series, Anthony Kaun Hai?, Double Dhamaal, among others, stated in an interview to Mid-Day that Sanjay Dutt is a ‘fighter’ and ‘he will emerge triumphant’. Cancer Survivors Manisha Koirala, and Yuvraj Singh Encourage Sanjay Dutt to Be a Fighter.

Arshad Warsi believes that Sanjay Dutt will get back to normal health with his will power. He was quoted as saying, “I don’t know anyone who would have survived (the difficulties) that he has faced head-on. Despite the situations, he has an air of positivity. I have never seen him crib about his hardships. He will emerge triumphant here too; he is a fighter.” Arshad and Sanjay were going to start filming for their upcoming project titled Blockbuster from next month. Here’s wishing Sanjay Dutt a speedy recovery!

(The above story first appeared on LatestLY on Aug 13, 2020 09:03 AM IST. For more news and updates on politics, world, sports, entertainment and lifestyle, log on to our website latestly.com).