The Kabir Singh actor is currently on a guilt trip for being 'damn selfish' and being a 'prick' in his younger days. Shahid, a father of two, now knows that parenthood isn't a cake walk! 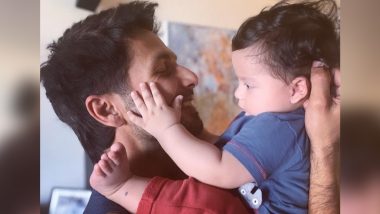 Almost every average desi parent has claimed that the kids will know the pain of being parents after they become parents! You heard it too? Well, Shahid Kapoor is experiencing it too. The Kabir Singh actor is currently on a guilt trip for being 'damn selfish' and being a 'prick' in his younger days. Shahid, a father of two, now knows that parenthood isn't a cake walk and he wants to say 'sorry' to his mom-dad for not understanding their pain. Nani's Jersey Director Gowtam Tinnanuri Will Direct Shahid Kapoor in the Film's Hindi Remake?.

In a conversation with Filmfare, Misha and Zain's father revealed, "I was pretty self-oriented till I became a parent. Though I believed I was selfless. But when I became a parent, I realised I was actually damn selfish. Now I don’t put myself first."

He continued, "I respect my parents a lot more today than I did before I was a parent. Now I understand what all they did for me. I don’t know if it’s too late for me to apologize but through Filmfare I say, ‘Mom and dad, sorry for all those times I was a prick’."

Wow, that was a warm gesture shown by the handsome hunk! After all, it is always better to be late than sorry, right? Anyway, he already made his parents proud by giving his first solo hit after so many years, with Kabir Singh. The film entered the 300-crore club too. If not anything, SK has sure poked all of his fans to apologize their parents if they haven't already!

(The above story first appeared on LatestLY on Oct 12, 2019 04:36 PM IST. For more news and updates on politics, world, sports, entertainment and lifestyle, log on to our website latestly.com).