While director Gowtam Tinnanuri earlier denied the stories of him directing Shahid Kapoor's Jersey remake, recent reports have confirmed him coming on board. 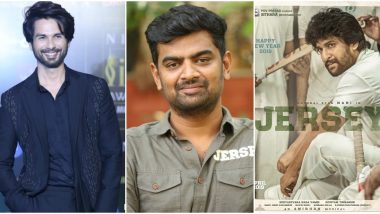 Shahid Kapoor is all set for another remake of a South release after his last release, Kabir Singh went on to become such a huge box office success. The actor finally got his due as a performer and honestly, even the makers were quite stunned with its humongous success. Following his success story, Sasha willingly gave his nod to another remake, this time a Nani starrer. The actor is set to step into Nani's shoes in the Jersey remake and we have some additional deets about his new project.

After Sandeep Reddy Vanga was retained as the director of Kabir Singh remake, Jersey director Gowtam Tinnanuri too will continue to helm its Hindi version. As per a report by industry tracker Ramesh Bala, Gowtam Tinnanuri is confirmed to direct Jersey remake starring the Haider actor. Guess, the actor is convinced about how the original directors are able to weave the same magic on the silver screen and wants to take no chances with his next big release. Jersey Star Nani to Star in Andhadhun's Telugu Remake?

Speaking about the leading lady opposite Shahid in this cricket drama, reports are rife that Kannada actress Rashmika Mandanna has been approached to replace Shraddha Srinath in this remake. The actress has even watched Jersey and understand the sensation that Shahid is currently. It will be wise for her to mark her Bollywood debut opposite Mr Kapoor and she has even expressed her desire to come on board. You can expect the announcement once the makers finalise all the formalities.

(The above story first appeared on LatestLY on Oct 07, 2019 12:00 AM IST. For more news and updates on politics, world, sports, entertainment and lifestyle, log on to our website latestly.com).