Sherni trailer is here and a few of the instances made us form a connection with Rajkummar Rao starrer Newton. The reason is obvious as both the movies are directed by Amit Masurkar. Here are five things about the trailer that reminded us of Newton 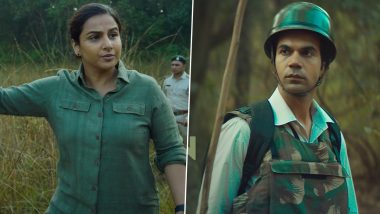 Sherni trailer is finally here. Honestly, we weren't quite sure what to expect of this movie as not much is known about its plot. The trailer makes it clear that it's not just a hunt to capture a man-eating tigress but also a means to revisit the many administrative flaws in the operations of a forest department. Being a movie directed by Amit Masurkar, who helmed the amazing Newton, Sherni will definitely be an interesting film to look out for. Although the trailer seemed a bit underwhelming as none of the plots are new, there are few similarities between Newton and Sherni that couldn't ignore. Let us tell you five of them. Sherni Trailer: Vidya Balan’s Forest Officer Tries To Tackle Natural and Man-Made Obstacles in this Amazon Prime Video Film (Watch Video)

Marsurkar's Newton spoke about a polling booth officer who is hell-bent on conducting polling as per the guidelines of the election commission even when it is at the war-torn Naxal area. Given the storyline, forests form an important character in the film. In Sherni, the plot arises in the forest itself because of the tigress. The imagery of both the movies is of rich natural fauna which is simply breathtaking.

Here's the trailer of Sherni

Newton also showcased how people with power try to manipulate a simple polling process just because it's a risky area. Sherni will also delve into this side of the forest department and politics as you can see in several scenes how many people get involved in this Tigress hunt for their own reasons. Newton: Pankaj Tripathi, Rajkummar Rao’s Film Screened for Bihar Polling Officers on Election Duty

Newton exposed the gaping divide between how tribes in the forests are treated and how they look at the administration. They have always been self-sufficient and even during elections, they would rather have their own man or woman. In Sherni too, there's a scene where a woman from the tribe there says if the forest department can't help, they will take care of it. Clearly, Sherni too will throw some light on this wedge which is only expanding.

Check out the trailer of Newton

In Newton, it is repeatedly said that the area has heavy Naxal activity but you hardly see any movement from their side. In the Sherni trailer, the tigress is never shown but implied through footages of paws and a banner saying 'Beware of the Tigress.' We wonder if Masukar uses the main plot point as a veiled medium to tell a completely different story from what is suggested. Newton speaks about it and we have a hunch Sherni would do too.

Newton was headstrong in his mission but even he felt a bit out of place at times when things didn't go as planned. Vidya Balan's character of a forest officer too looks lost and helpless in a few instances. The vulnerability of the characters seems to be one of the biggest key points for Masurkar's stories which makes them more human and genuine.

(The above story first appeared on LatestLY on Jun 02, 2021 02:09 PM IST. For more news and updates on politics, world, sports, entertainment and lifestyle, log on to our website latestly.com).