Shershaah: Himanshu Malhotra Opens Up About His Role As Major Rajiv Kapoor in The Sidharth Malhotra-Starrer

Shershaah is directed by Vishnuvardhan and co-produced by Karan Johar. It is all set to release on August 12 on Amazon Prime Video. 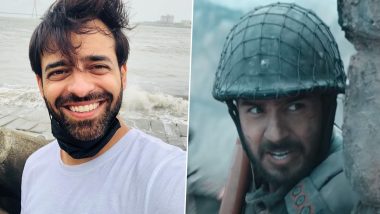 Actor Himanshu Malhotra will be seen as Major Rajiv Kapoor in the upcoming movie Shershaah. The actor who is known for his projects like Ek Nayi Umeed-Roshni and Nach Baliye 7 seems enthusiastic about his upcoming project. The film features Sidharth Malhotra in the lead role. Shershaah: Sidharth Malhotra and Kiara Advani’s War Biopic to Premiere Directly on Amazon Prime Video in August 2021.

Speaking about the film, Malhotra says: "I was supposed to do a project with Kunal Kohli and casting director Jogiji took my audition for the same. But that did not happen and I got called for a different audition from Jogiji again. I was not aware that it is for the film 'Shershaah' and Sidharth Malhotra will be playing the title role."

The film is directed by Vishnuvardhan and co-produced by Karan Johar. It is all set to release on August 12 on Amazon Prime. While talking about his character and shooting experience in Kargil and Palampur, the actor says his role involved a lot of physical training and in fact he got injured on the sets. But overall for him this entire experience was amazing and he enjoyed it a lot.

He shares: "Lot of physical training was required and my knees and elbow got hurt during the shoot. Shooting in Kargil and Palampur was great fun. All the war scenes were shot in Kargil. Wearing the Indian Army uniform and playing a Major's role is a different feeling altogether." Shershaah At Kargil: Sidharth Malhotra, Kiara Advani, Karan Johar Celebrate Vijay Diwas With Indian Soldiers At The Trailer Launch Event (Watch Video).

The 39-year-old actor revealed the entire schedule of working in Kargil and the various restrictions that were imposed. He adds: "We were all surrounded by the Army unit and that was an overwhelming experience. They were guiding us. I remember during our Kargil schedule, due to various restrictions, we were not allowed to step out and we would jam together post-pack-up. The mobile network was not good, so we all used to entertain ourselves with live music and that was an enthralling experience."

Himanshu is full of praises for his co-star Sidharth Malhotra as he calls him an excellent actor and very down-to-earth person. "I feel Sidharth has portrayed Vikram Batra's role excellently. He has absolutely no airs about his stardom and knows his skill very well. Sidharth is also a Punjabi like Vikram Batra so they look similar as well," he concludes.

(The above story first appeared on LatestLY on Aug 02, 2021 07:05 PM IST. For more news and updates on politics, world, sports, entertainment and lifestyle, log on to our website latestly.com).