Bollywood actor Sidharth Malhotra is one of the most gorgeous faces we have in the industry right now. And as the actor turns a year older today (Jan 16), we are about to shower some love on the star. As we are about to list five of his amazing works till now. Read on. 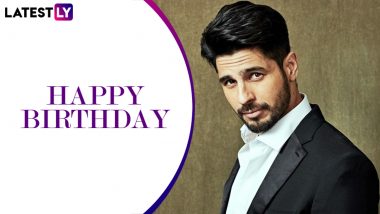 Bollywood actor Sidharth Malhotra is one of the most gorgeous faces we have in the industry right now. He’s a tall and handsome guy any girl would fall for instantly. But is looks everything to survive in the showbiz? And the answer to this is no. Sid who made his Bollywood debut with Karan Johar’s Student of the Year (2012) has given fans films that prove he has got the talent. While the star has indeed faced highs and lows in his career, his sheer dedication makes him survive in an industry that is tough and complicated. Sidharth has surely come a long way and is growing as an actor with every film. Thirstday Special: 7 Hot Pictures of Birthday Hunk Sidharth Malhotra That Are Sexy, Sultry And Sizzling!

And as Sid turns a year older today (Jan 16), we are about to shower some love on the star. As we are about to list five of his amazing works (according to us) till now which are of different genres and saw him performing at his best. In a nutshell, the movies below affirm that he has got what it takes along with the right script and director. Have a look! Happy Birthday, Sidharth Malhotra! Your Incredible and Dapper Fashion Makes It Every Penny Worth Our Stare!

Directed by Shakun Batra, the storyline and fuss-free acting of the star casts makes this a must-watch. It’s a modern-day family drama were Fawad Khan and Sidharth Malhotra essay the role of bothers. The raw and natural acting of Sid in this one who struggles to find his true calling will make you emotional.

Who thought that Sidharth will nail it as a goon onscreen, but he did in this film. His exceptional performance in this one as Guru will give you goosebumps. The story of the flick revolves around Sid who falls in love with a girl, Aisha (Shraddha Kapoor). But the major twist comes in when the heroine gets murdered by a sadist serial killer, Rakesh (Riteish Deshmukh).

Starring Sonakshi Sinha opposite Sidharth, this thriller sees the latter in a never seen before avatar. It’s a contemporary adaptation of the 1969 hit of the same name. Sid along with Sona and Akshaye Khanna has done a good job in this movie and thanks to the story it keeps you on your toes.

HTP makes you smile, laugh, cry as Sid and Parineeti Chopra are fabulous in this one. We do agree that many might not connect to the film, as it’s low on masala. Having said that, the chemistry of the leads is the highlight of this twisted love tale.

Student of the Year (SOTY)

Facing the camera for the first time ain’t easy? And considering this, we feel, Sid performed tremendously well in his debut Karan Johar film. The romantic-comedy was a hit among youngsters due to its larger than life appaeal, predictable story and fresh cast. Sidharth grabbed everyone's attention with his smart acting chops.

That's it, guys! These are the top five roles of the 'Munda Kukkad Kamaal Da' which has been loved by the audience as well as critics. Having said that, the actor has some brilliant projects ahead in his career namely biographical film  Shershaah and actioner Mission Majnu. Happy birthday, Sidharth Malhotra. Stay tuned!

(The above story first appeared on LatestLY on Jan 16, 2021 12:02 AM IST. For more news and updates on politics, world, sports, entertainment and lifestyle, log on to our website latestly.com).