Sobhita Dhulipala: 'If Need Be, I'll Create Opportunities for Myself'

Actor Sobhita Dhulipala says she will create opportunities for herself as a writer in case she feels boxed in a particular zone and doesn't feel challenged as a performer. 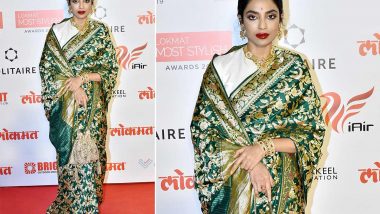 Actor Sobhita Dhulipala says she will create opportunities for herself as a writer in case she feels boxed in a particular zone and doesn't feel challenged as a performer. The actor, who made her debut in 2016 with Raman Raghav 2.0, recently tasted critical acclaim for her performance in Amazon Prime Video series "Made in Heaven". Though she is grateful for the diverse projects that came her way -- films Chef, Kaalakaandi and Moothon, and Netflix series Bard of Blood, Sobhita wouldn't mind penning one for herself. Yami Gautam Gets Accused Of ‘Disrespecting’ Assamese Culture, The Actress Has A Perfect Reply (Watch Video)

"In India, people typecast a lot, not just in movies but in real life too. If you have done a certain kind of work or film, they keep calling you for the same thing. I don't want to feel that I am not getting this or that and get typecast. One doesn't get multiple chances if you are not from here. "I will write something for myself, if it comes to that, I will find another medium of expression. I don't want to feel silenced or that I am not being given the chance because till where I have reached is a big thing and it is a dream of so many people," she told PTI in an interview. South Actress Ramya Krishnan Joins Vijay Deverakonda and Ananya Panday in Puri Jagannadh’s Film?

The 27-year-old actor believes there is more than one way to get your artistic voice heard. "If in a certain field there is less variety, directors and producers can't visualise, you make something, write something. However, the kind of chances I have got so far is a big deal, I don't want to be like, 'I deserve more'. It is an ungrateful way to look at it," she added. Sobhita said it is essential to keep reinventing oneself with every film, something she asserted she has been doing.

"It is tough for anybody to break the stereotype of any kind. My career path has been so unconventional. It is essential to remain honest to what you believe in, even if the majority doesn't understand you. They will try to listen and that's how change happens." She is set to work on producer Ronnie Screwvala's "Sitara", a Malayalam film "Kurup" with actor Dulquer Salmaan and the second season of "Made in Heaven".