The untitled project is helmed by Puri Jagannadh and will be produced under the banner of Dharma Productions and Puri Connects. Vijay Deverakonda and Ananya Panday have started shooting for the film in Mumbai. 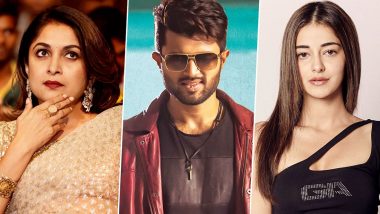 Ramya Krishnan is one of the most popular actress in south. Besides working in south cinema, she has also worked in few Hindi films. Her role in the Baahubali series, as Sivagami Devi, was loved by the movie buffs. She has played another important role in the web-series, Queen. She played the role of late Tamil Nadu Chief Minister Jayalalithaa, who was also fondly called as Thalaivi. This amazing actress is all set to play another important role. Vijay Deverakonda-Ananya Panday's Leaked Pics from Puri Jagannadh’s Film Shoot Will Remind You of Aamir Khan-Rani Mukerji from Ghulam.

A source revealed to ETimes that Ramya Krishnan will be a part of Vijay Deverakonda and Ananya Panday’s upcoming flick, and she has reportedly joined the cast. After the makers announced about this project with the lead star casts name, there has been no official update. So we’ll have to wait to know if the reports doing rounds on Ramya Krishnan is true or not. Besides Ramya, the report cites that even Habib Hossain has joined the cast. Ananya Panday Welcomes Vijay Deverakonda to Bollywood! Duo All Set to Be Featured in Puri Jagannadh’s Film.

The untitled project is helmed by Puri Jagannadh and will be produced under the banner of Dharma Productions and Puri Connects. Vijay Deverakonda and Ananya Panday have started shooting for the film in Mumbai, and there have been few pics of the duo that have been leaked online. The makers are yet to announce the film’s title and the release date. Stay tuned to LatestLY for more updates from the world of entertainment.

(The above story first appeared on LatestLY on Feb 29, 2020 04:20 PM IST. For more news and updates on politics, world, sports, entertainment and lifestyle, log on to our website latestly.com).