While many Bollywood celebs haven't yet joined this trend, we did find a few celebs who shared their amazing throwbacks. 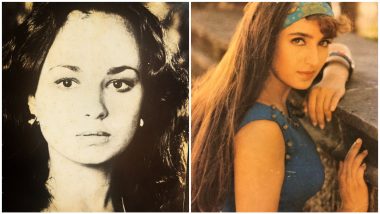 With most countries across the globe in a lockdown, TikTok challenges and other social media trends have been bringing people together. The recent trend to take over the internet has been the #Meat20 challenge. With this trend netizens have been posting throwback pictures of the time when they were 20. It has been amazing watching social media users sharing fun pictures of themselves in quirky outfits, different hairstyles from their younger days. While many Bollywood celebs haven't yet joined this trend, we did find a few celebs who shared their amazing throwbacks. #MeAt20 Trends on Twitter: People Share Throwback Pictures of Themselves When They Were 20!

Actress Soni Razdan shared a gorgeous black and white picture of herself from when she was probably 20 and we have to say, she looks extremely gorgeous in. Among other celebs, Tisca Chopra also posted two snaps of herself from when she was 20 from her modeling days. The actress even had an amazing caption to go along with it as she wrote, "#MeAt20 and also apparently #ChemicalFree." Filmmaker Hansal Mehta decided to make a funny take on this trend and shared an old snap of George Clooney instead. Check out the #MeAt20 pictures of celebs. Tisca Chopra Believes Nobody Would Venture into Films but Back OTT Content till Next Year Due to COVID-19 Crisis.

Almost sure I was 20 in this pic. #MeAt20 pic.twitter.com/JiWFt5DECu

#MeAt20 I don’t have a picture of me at 20 but here is @TheFarahKhan & me in our early 20’s on location. pic.twitter.com/mG4PRWuESB

We certainly hope more celebs share their amazing pictures from the 20s just so that we get a glimpse of their fun throwbacks and also to bring smiles amidst the tense times that we are in.

(The above story first appeared on LatestLY on Apr 18, 2020 07:15 PM IST. For more news and updates on politics, world, sports, entertainment and lifestyle, log on to our website latestly.com).