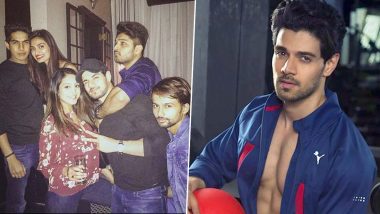 Sushant Singh Rajput's death probe has now been transferred to CBI owing to his fans' constant demands. Some irregularities reported in the investigation by Mumbai Police also paved the way for the same. But news channels obviously feel obliged to continue with the blame game without doing any fact check. Sooraj Pancholi, whose name was dragged in the Disha Salian death case, got dragged again when a picture of his with his friend was used as a proof to show he knew Disha. Sooraj took to Instagram to publish an angry post calling out the news channel for not getting their facts right. Sooraj Pancholi Reveals He Auditioned for Kai Po Che, Says ‘Nepotism Has Nothing to Do With What’s Happening Right Now’

Sooraj even used a hashtag 'F**k You Fake Media' and blasted them for calling his friend Anushri Dave, Disha Salian. Check out the post here...

Complete bullshit!! #FuckYouFakeMEDIA Is this the media we are supposed to trust?? That girl in the picture which was clicked in 2016 is not “Disha Salian” that is my friend @agaur21 (Anushri Gaur) who doesn’t even live in India .. Please stop brainwashing people and PLEASE stop harassing me and dragging me into this ! Start being responsible of your actions as it can ruin someone’s life ! I have said this before and I’m saying it again “I have never met or spoken to Disha Salian in my life” Seriously FUCK YOU AND FUCK YOUR FAKE NEWS! 🖕🏽 I’ve had enough.

Sooraj had earlier revealed that he didn't even know Disha when he was linked to her. But these days news channels are just good at playing the blame game rather than doing their actual job of finding facts.

(The above story first appeared on LatestLY on Aug 06, 2020 12:21 PM IST. For more news and updates on politics, world, sports, entertainment and lifestyle, log on to our website latestly.com).