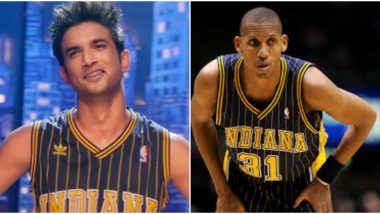 It's been a month since Sushant Singh Rajput left for heavenly abode and yet, we are struggling to gulp down this shocking news. Sushant's memories will be etched in our hearts forever and we are glad to witness his last release, Dil Bechara, releasing on Disney+ Hotstar. While its title track was released a couple of weeks back, the ones who didn't notice should know that he was trying to ape Reggie Miller's moves in the song. The legend obviously took a note of it later on. Like Dil Bechara Title Track, Gallan Goodiyaan, Roop Tera Mastana and These Songs Are Also One Long Continous Shot (Watch Videos).

Sushant is seen performing Miller's iconic moves in the song and he's also wearing the NBA player's jersey.  Reggie was tagged by several of Sushant’s fans on social media and the legend even commented on one of the videos saying “His memory and these moves will live on, Gone But Not Forgotten. The player later retweeted an article on the same thereby confirming the news of him commenting and appreciating Sushant's efforts. Dil Bechara Title Track: Sushant Singh Rajput Leaves Us His Best Moves to Dance to His Memory With This Song (Watch Video).

The title track sung and composed by AR Rahman was choreographer in one take by Farah Khan and she didn't charge a single penny for the same. “I remembered Sushant had once come to a reality dance show that I was judging as a celebrity guest and that’s the only time the celebrity guest danced better than the contestants on that show… We rehearsed a whole day and then finished shoot in half a day,” she wrote on Instagram while describing her memory with the actor.

Dil Bechara, directed by Mukesh Chhabra also stars Sanjana Sanghi and will release on the OTT platform on July 24 for all the subscribers and non-subscribers.

(The above story first appeared on LatestLY on Jul 14, 2020 02:08 PM IST. For more news and updates on politics, world, sports, entertainment and lifestyle, log on to our website latestly.com).