Sushant Singh Rajput Was Like Our Son, We Also Want to Know Reason Behind His Suicide, Says Sanjay Raut 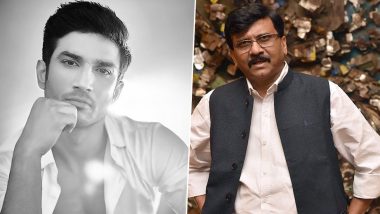 Mumbai, Aug 14: Shiv Sena MP Sanjay Raut on Friday said that his party wants to know the reason behind the death or suicide of Sushant Singh Rajput as he is also like "our son" and asserted that there is no "political" interfere in Mumbai Police's investigation in the case.

"We have full sympathy for Sushant Singh Rajput's family. Yesterday I just said that they should have some patience but it was shown that I have threatened them. Was that a threat? Trust Mumbai Police. If you think they are not doing a good job then go to CBI. They can also approach the UN and CIA," Raut told ANI. Kriti Sanon on SSR Case: ‘I Hope and Pray That the CBI Takes Over, So It’s Investigated Without Any Political Agendas’.

"Sushant Singh Rajput was also our son. He lived in Mumbai. He was an actor. Bollywood is Mumbai's family. What enmity will we have? Even we want his family to get justice. We want the secret behind his death or suicide to come out. There is no political affair in the investigation of Mumbai Police," he said.

Earlier on Wednesday, Anish Jha, lawyer of BJP MLA Niraj Kumar Singh, a relative of the deceased actor said Raut has been given 48 hours to apologise for his recent statements in connection with actor Sushant Singh Rajput's death case.

Responding to Republican Party of India (RPI) chief Ramdas Athawale's claim that Maha Vikas Aghadi (MVA) government in Maharashtra will fall after Ganeshotsav, the Rajya Sabha MP said: "Those who do not have some work predict things like this. This government will run for five years. There is no internal fight among the three parties."

"We believe that BJP is a strong Opposition with 105 MLAs and standing like a big rock. If we don't do work properly, then it will fall on us. We need the guidance of BJP being a principal opposition," he said.