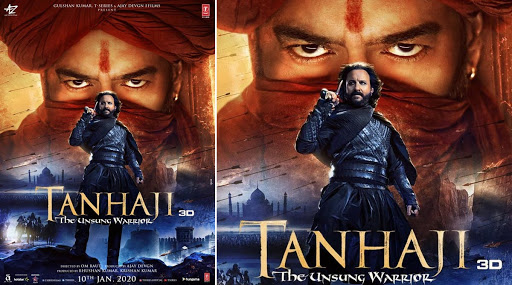 Tanhaji The Unsung Warrior feels no pressure from the new releases namely Panga and Street Dancer 3D in its third weekend. Thanks to the tax-free status at several states, the film has managed to mint money by the minute. Even in its third weekend, there is no stopping this film at the box office. In fact, it is trending far better than a lot of blockbusters over the years. It earned Rs 9.52 crore and is expected to have a double digit number today. The film as of now has earned Rs 212.35 crore and has become Ajay Devgn's biggest hit in his career. The feat was with Golmaal Again till recently which had earned Rs 205.69 crore in its entire run in 2017. Tanhaji Box Office Collection Day 15: Ajay Devgn’s Film Affects Street Dancer 3D’s Opening Day Numbers In The Mumbai Circuit, Crosses Rs 200 Crore Mark

Dollops of nationalism, valour and bravery of Tanhaji Malsure helped this film become a raging hit so much so that people aren't too bothered by the historical inaccuracies. Maharashtra has a huge hand in its victory at the box office and now, its even tax-free in the state.

This goes on to show that people are interested in their own history more than watching an India-Pakistan dance off or a woman's comeback to Kabaddi after seven years and marriage.