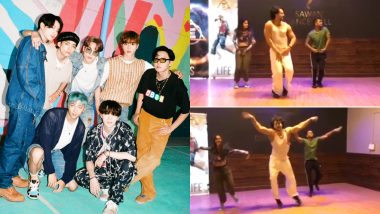 Tiger Shroff left Indian fans of the boy band, BTS, ecstatic, when he danced to the tunes of "Dynamite". The actor keeps showing off his dancing skills on various songs. Of course, now the fans want him to collaborate with BTS, the members of which are also known for their smooth dancing skills party from impressive singing. A fan asked the actor about the possible collab, and he said, "With BTS? Meri toh aukaat nahi hai (I can hardly even dream of such a thing). These guys are the biggest group in the world right now." Tiger Shroff Gives an Explosive Performance on BTS Song Dynamite (Watch Video).

Tiger added, "I am such a big fan of them. I recently did a dance vlog on their song 'Dynamite'. It is such a feel-good song."

"In times like these, we need that kind of vibes. I think the reason their music transcends boundaries and goes across the world is because of their lyrics, messages, visuals and of course, their talent. They are such holistic performers," he added.

K-Pop band BTS broke set a new record with their latest song, "Dynamite". The band became the first from South Korea to enter the Billboard Hot 100 chart. The number has also broken the record of digital sales set three years ago by Taylor Swift's "Look What You Made Me Do". BTS member Suga told the journalists that the band would love to play at the Grammys and also hopes to win an award.

On the work front, Tiger was seen in Baaghi 3, earlier this year. The movie minted money at the box office but was panned by the critics. He is gearing up to start shooting the desi remake of Rambo. Also, Heropanti 2 has been announced.

(The above story first appeared on LatestLY on Sep 27, 2020 07:10 PM IST. For more news and updates on politics, world, sports, entertainment and lifestyle, log on to our website latestly.com).