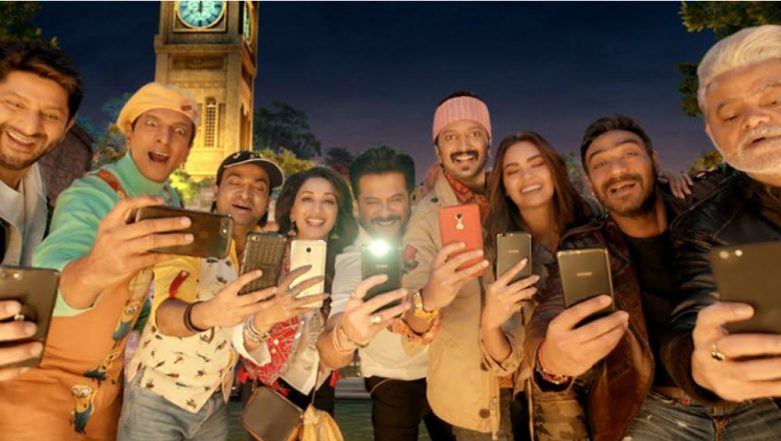 We have reached the time when a new movie releases at the box office and on the internet and nobody bats an eyelid. The latest film to become a victim of online piracy is this Friday’s big release, Total Dhamaal. A multi-starrer comic caper featuring the likes of Ajay Devgn, Anil Kapoor, Madhuri Dixit Nene, Arshad Warsi, Riteish Deshmukh among others released on February 22, and on the same date was leaked by TamilRockers. Yes, Total Dhamaal full movie in HD is leaked for free download as well as available for free watch online. Total Dhamaal full movie is available in 1080p, 720p, 480p, prints! Not only TamilRockers, but there are also several illegal sites such as TamilYogi, TamilGun, Filmywap, Onlinemoviewatchs, 123movies and there are even reports of Total Dhamaal streaming on YouTube! Now, this might prove to be double trouble for Indra Kumar-directed comedy film, which has managed average reviews. Total Dhamaal Movie Review: Ajay Devgn, Anil Kapoor and Madhuri Dixit’s Madcap Treasure Hunt Is a Surprisingly Fun-Filled Ride With a Few Bumps on the Way.

Total Dhamaal is the third instalment of the Dhamaal film series. A lot has been talked about this film courtesy starry addition to the original star cast. We have the hit on-screen pair of Anil Kapoor and Madhuri Dixit pair up after ages along with the bankable Ajay Devgn. With evergreen comedy kings in form of Johnny Lever, Javed Jaffrey, Sanjay Mishra, Sudesh Lehri, Manoj Pahwa, Rajpal Yadav, and others, the film is touted to be a big hit. However, this ambitious comic caper is facing the wrath of online piracy, especially the way TamilRockers has dented the box office business of movies in the past.

It has become a routine for illegal websites to leak the film on the same day as of its official release. If leaking on websites and blocked torrent sites (ironically) is not enough, the movie is leaked on social media platforms Facebook and Twitter for free streaming. Not only Bollywood, but also Hollywood, regional cinema, every film is under these illegal websites’ radar. We have seen films such 2.0, Gully Boy, Dhadak, Uri: The Surgical Strike, Avengers: Infinity War, Manikarnika: The Queen of Jhansi, Zero, Thugs of Hindostan, Petta, Sanju, Deadpool 2, and more have been leaked by TamilRockers.

So far, Total Dhamaal has earned almost 40 crores in two days. The break-up for two days is Friday 16.50 crore, Saturday 20.40 crore, taking the total to Rs 36.90 crore. That is phenomenal considering the film has fetched mixed to negative movie reviews and also facing online piracy threat. The film would aim to do a 60-65 crore opening weekend collection. But its lifetime BO collection will depend on how the film fares on the weekdays and for that, the film needs to be watched in theatres and not on laptop or mobile.