Yami Gautam: Will Always Respect All My Films As They Gave Me Work

Yami Gautam, who plays an IPS officer in the upcoming Dasvi, says she will always respect all her films because these projects gave her work and sustained her through the years. Besides Dasvi, Yami will also be seen in A Thursday and Bhoot Police. 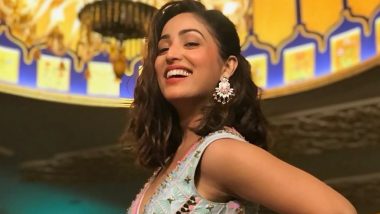 Yami Gautam, who plays an IPS officer in the upcoming Dasvi, says she will always respect all her films because these projects gave her work and sustained her through the years. "One thing I learnt in my journey so far is when I had come to the city for the first time, I came with a sense of fearlessness. I was a shy girl and have always been a reserved person but I was fearless. I didn't have the fear of saying no to something I didn't believe in it," Yami tells IANS. Dasvi: Yami Gautam Shares Her Interesting Experience While Shooting at Agra Central Jail for the Social-Comedy Film.

The actress has made a mark over the years with her roles in films such as Vicky Donor, Kaabil, Uri: The Surgical Strike, Badlapur and Bala. "I will always have respect for all the films I have done because at that point of time that was what gave me work. I will never be disrespectful to anybody or any film, even the ones that didn't do well or weren't good films. In your heart you know that it's not going to be a good film. Knowing that and still signing it comes from a sense of fear. Now I am back to being the same Yami who does not have fear," she adds. A Thursday: Yami Gautam, Dimple Kapadia, Neha Dhupia’s Film Goes on Floor (Read Tweet).

Yami claims good work will always be her criterion of success. "The most import thing for me has been always been to prioritise working on myself as an actor. There will always be senior actors but it's about who is a good actor. There is a space for every film and actor but for someone like me it's important to know what is the depth in the character versus if it's a big film or big budget. It's the script that is important for me," she says. Besides Dasvi, Yami will also be seen in A Thursday and Bhoot Police.

(The above story first appeared on LatestLY on Mar 29, 2021 11:08 AM IST. For more news and updates on politics, world, sports, entertainment and lifestyle, log on to our website latestly.com).