YouTuber CarryMinati aka Ajey Nagar marked his foray in the music score of a Bollywood film with Abhishek Bachchan starrer Big Bull. He was also featured in Salim-Sulaiman's soundtrack 'Date Karle' and more. 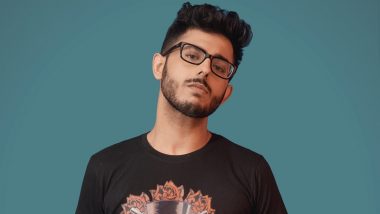 YouTuber CarryMinati overcame lockdown anxiety while shooting for his debut film Mayday starring Amitabh Bachchan and Ajay Devgn. Ajey Nagar, 22, who runs his YouTube channel with the name of 'CarryMinati', faced a creative roadblock during the pandemic and couldn't create content for his YouTube channel for the longest time. CarryMinati Aka Ajey Nagar All Set to Make His Bollywood Debut, Bags THIS Ajay Devgn Film.

He said: "Isolation and the pandemic somewhere affected me at a very subconscious level and there were days I felt creatively challenged. However, the film shoot was a gamechanger in the midst of it all. It was very therapeutic and gave me perspective I was seeking creatively".Ajay Devgn And Team Rework On Mayday Schedule After Rakul Preet Singh Tests Positive For COVID-19.

Ajey marked his foray in the music score of a Bollywood film with Abhishek Bachchan starrer Big Bull. He was also featured in Salim-Sulaiman's soundtrack 'Date Karle'. He has rap singles like 'Vardaan', 'Yalgaar', 'Zindagi', 'Trigger', 'Warrior', and 'Bye Pewdiepie' to his credit.

(The above story first appeared on LatestLY on Aug 02, 2021 07:12 PM IST. For more news and updates on politics, world, sports, entertainment and lifestyle, log on to our website latestly.com).