Charu Asopa Claims Husband Rajeev Sen Moved Out Days Before their First Anniversary, Insists No One is Brainwashing Her 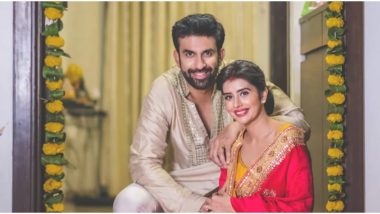 While we read reports of some troubles brewing in their paradise, newlyweds Rajeev Sen and Charu Asopa had always maintained a dignified silence on it until recently. While Sushmita Sen's brother had earlier claimed that someone from Charu's friend circle has been brainwashing his simple and innocent wife, she, on the other hand, insists there's no truth behind his speculations. Charu finally broke her silence in her recent interaction with E Times where she revealed how he flew to Delhi just days before their first wedding anniversary. Iti: Sushmita Sen’s Brother Rajeev Sen To Make His Bollywood Debut With Vivek Oberoi-Backed Project.

“No one is brainwashing me. I am mature enough to make my own decisions — something that I have always done. Main hamesha se apne decisions khud leti aayi hoon. Maybe, he was brainwashed into deleting our pictures from his social media handles," she said in her interaction with E Times.

Refuting the claims made by her husband earlier, Charu said, "If he thinks that I am innocent and gullible, and could be influenced by those around me, why did he leave me to live on my own during these tough times? This is the time for families to come together and be by each other’s side. But, Rajeev moved out and flew to Delhi a few days before our first wedding anniversary. It’s been two months now. Why would he do that? Shaq ka koi ilaaj nahi hai (There is no cure for doubt). What led to this and the issues in our relationship... there is a lot that I can talk about, but I don’t want my personal life to become a public spectacle. I don’t want it to become a part of anyone’s gossip session.” Rajeev Sen On Deleting Wedding Photos: 'I Am In A Happy Zone', Wife Charu Asopa Refuses To Comment (Details Inside).

Rajeev had earlier warned that whenever he finds the name of that someone who has been brainwashing his wife, he would publicly slam him while releasing all the details. The couple's separation earlier made headlines when Bombay Times reported that they weren't staying together. Later they even deleted their wedding photos from Instagram and it only added fuel to the fire.

(The above story first appeared on LatestLY on Jul 14, 2020 01:01 PM IST. For more news and updates on politics, world, sports, entertainment and lifestyle, log on to our website latestly.com).