Crooned by Daler Mehndi, the music of the song is composed by Hitesh Sonik. Producer Luv Ranjan has penned down the inspiration lyrics of the song which is combined with a very energetic, upbeat music. 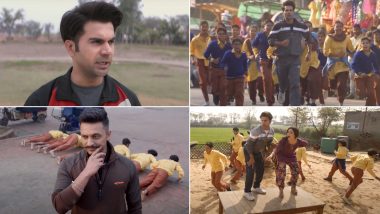 Chhalaang starring Rajkummar Rao, Nushrratt Bharuccha and Zeeshan Ayyub is making all the right kind of noises. The first two songs from the film titled Care Ni Karda and Teri Choriyaan have already struck a chord in the audience's heart and now the makers are all set to get the spirit high. The third song from the film titled Le Chhalaang has just been released where we see Rajkummar prep for a battle with Zeeshan. Chhalaang Song Care Ni Karda: Rajkummar Rao and Nushrratt Bharuccha's Chemistry Has Your Attention in this Yo Yo Honey Singh Song.

The song shows PT teacher Rajkummar training his students for different sports. The team tries out unique ways to get fit and ready for the competition while Zeeshan Ayyub watches them with ego filled in his eyes. There are snaps of students playing kabaddi, basketball and other sports, setting just the mood for the film. We get to see a small glimpse of Nushrratt in the song as well as she is seen helping Rajkummar with the extensive training and is definitely a cherry on the top.

Crooned by Daler Mehndi, the music of the song is composed by Hitesh Sonik. Producer Luv Ranjan has penned down the inspiration lyrics of the song which is combined with a very energetic, upbeat music.

Talking about the film, director Hansal Mehta in a statement, said, “We made this film with the hopes of delivering a beautiful message through a light hearted comedy. While being extremely relevant to student and teacher’s life, Chhalaang is a complete package filled with emotions of love, comedy, friendship, rivalry and emotional drama making it a perfect Diwali family entertainer.” Chhalaang First Look Poster: Nushrat Bharucha and Kids Can’t Help but Stare at Rajkummar Rao Who’s In Deep Sleep.

(The above story first appeared on LatestLY on Nov 05, 2020 05:32 PM IST. For more news and updates on politics, world, sports, entertainment and lifestyle, log on to our website latestly.com).