Ashley Tisdale Looks Back at Being Judged for Her Nose Job, Says ‘Plastic Surgery Wasn’t Culturally Accepted Then Like It Is Now’

Actress Ashley Tisdale had a rhinoplasty procedure over a decade ago and she said that she was judged and made to feel ashamed after the nose job, which she went for in order to correct an ongoing health issue. 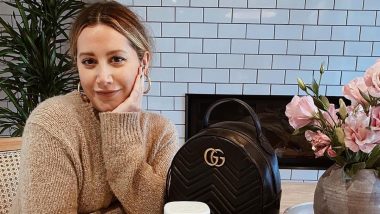 Actress Ashley Tisdale had a rhinoplasty procedure over a decade ago and she said that she was judged and made to feel ashamed after the nose job, which she went for in order to correct an ongoing health issue. Tisdale insists she didn't go under the knife to "change (her) appearance", femalefirst.co.uk reported. "As most of you might know, I had rhinoplasty 15 years ago. At the time, it didn't feel like THAT big of a deal to me because the decision was based on serious health issues I was having. To be clear, it was not about changing my appearance," Tisdale wrote in a blog post on her website, Frenshe. Mom-to-Be Ashley Tisdale Has No Plan to Go on a Long Maternity Break

"After several doctor's visits about my health issues, they also suggested shaving my 'bump' down. I was young and didn't put much thought into it, so I decided, why not? It wasn't a big deal to me nor was it like I was dreaming of the day I'd get a nose job." Tisdale said she was "proud" of who she was and so didn't let the criticism get to her. "(People) constantly tried to paint a picture of me as someone who didn't like their appearance. I loved myself, but I was just a very unaware person at that time (as you all have seen my wardrobe choices LOL!). I was proud of who I was back then, and still proud now," she said. Ashley Tisdale is Expecting Her First Child with Husband Christopher French (View Post)

She observed how plastic surgery is accepted now. "Plastic surgery wasn't culturally accepted then like it is now. When I got it done I was scrutinized, judged, and made to feel ashamed over my decision. I made a decision that was no one's business (and is STILL no one's business) and for that decision, I was constantly made to feel bad about it." The actress is currently expecting a daughter and doesn't want her to be "met with judgement or shame" for her choices.

"At the end of the day, I'm having a daughter, and I hope her choices aren't met with judgment or shame. It's taken years for me to process this experience - an experience that I didn't think was that big of a deal either," she said. Tisdale said that she has been very open about her "mental health, breast explant, and everything in between". "It's not easy being vulnerable and I felt like that was taken advantage of during this interview. I'm glad I have this platform where I can share my experiences and hope that you can learn something from them - including the negative aspects of plastic surgery," she said.

(The above story first appeared on LatestLY on Jan 30, 2021 02:17 PM IST. For more news and updates on politics, world, sports, entertainment and lifestyle, log on to our website latestly.com).