Ben Kingsley Birthday Special: 5 Best Performances Of The Legendary Actor That Left Us In Awe Of Him

Ben Kingsley has given some of the most memorable performances with Gandhi being our favourite. On his birthday, let us tell you a bit more about his incredible roles. 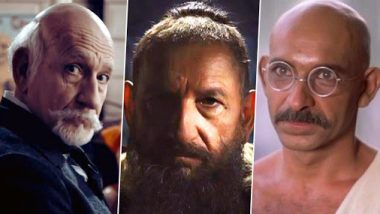 For Indians, the name Sir Ben Kingsley is synonymous with Mahatma Gandhi. He played the father of our nation with so much conviction that even today, we feel that was one of the best movies on Mahatma. Guess the fact that he was born as Krishna Pandit Bhanji made a difference here. But this actor has a lot of incredible performances under his belt. Being an excellent performer, his filmography has a lot of variety, something every actor would aspire to have. So today on his birthday, we list out five characters portrayed by him which have left us in awe of him. Gandhi Full Movie Download and Watch Online Officially: Watch Mahatma Gandhi Biopic Free in HD Print Starring Ben Kingsley

This is quite an irony if you see. Ben Kingsley is a British born who played Mahatma Gandhi in Richard Attenborough's 1982 film. Mahatma Gandhi fought against the Britishers for India's freedom. But no one has looked as convincing as him in the garb of Gandhi. It is still our favourite film on Mahatma.

Kingsley joining the Marvel brigade did come as a pleasant surprise.  As Mandarin, he looked sharp and fatal although his character needed a little more flesh than it was awarded. But he was menacing and had the best lines in the film. He was a reality check Tony Stark needed in the film!

Hugo was Martin Scorcese's first attempt at 3D with Kingsley playing French Filmmaker Georges Méliès. He played an old man trying to bury his glorious past, looking for redemption. The actor showed his agony and a sense of loss fantastically. This is a must-watch for anyone who hasn't already watched it.

A conniving and smart villain, Don Logan was smooth in Sexy Beast. Ben Kingsley added the dangerous calmness to the character that will make you hate it more. A sociopath delivered perfectly by the actor.

Schindler's List by Steven Spielberg is the bible every filmmaker refers to at least once in their career. It's an epic and Kingsley's role as a Polish Jew named Itzhak Stern was commendable. He was a perceptive man in the film who along with his master helped many jews.

(The above story first appeared on LatestLY on Dec 31, 2019 10:26 AM IST. For more news and updates on politics, world, sports, entertainment and lifestyle, log on to our website latestly.com).